Buying a full-size luxury SUV is an exercise reserved for those with very large expendable incomes, though the updated Infiniti QX80 will see you get away with a big and bold beast without breaking the bank.

We’re talking a bit under $111,000 (plus on roads) here, and while that’s a lot of money, true, compared to some of the other vehicles in this category it’s actually a bargain!

The Infiniti QX80 landed in Australia in 2015 and immediately got a lot of people off-side with its ‘beluga whale’ styling.

Thankfully, commonsense has prevailed and the Infiniti designers have gone to work toning down the look of the big girl, it’s now a vehicle that is a lot less offensive.

There’s a new bonnet design, new grille, bumpers and some changes to the rear tailgate as well. 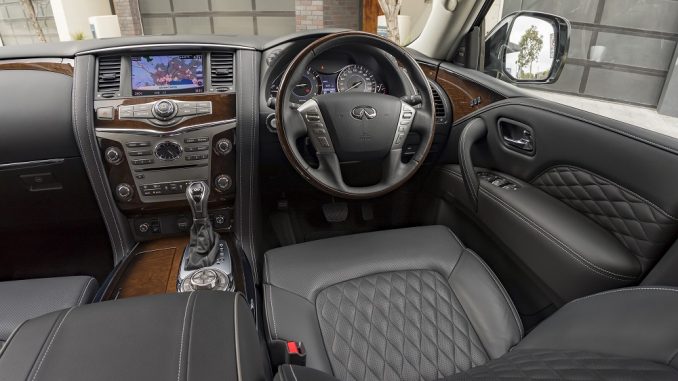 The 2018 version of the QX80 didn’t get as much attention as the interior…by their own admission Infiniti admit that the updates are really only designed to get the vehicle through to a forthcoming new-gen version.

Sadly, although comfortable and roomy, the QX80 cabin is a bit of a let down.

The dash layout and design is looking a bit dated, you only get a black and white driver info screen and you won’t find features like digital radio, Apple CarPlay or Android Auto.

There is excellent storage though, and comfy seats, the Infiniti also picks up points for roof and A-pillar mounted grab handles, big sun visors with extenders and comfortable armrests.

There’s plenty of power outlets too and when driving along you will never hear a creak or rattle.

The standard features list is pretty long and includes: 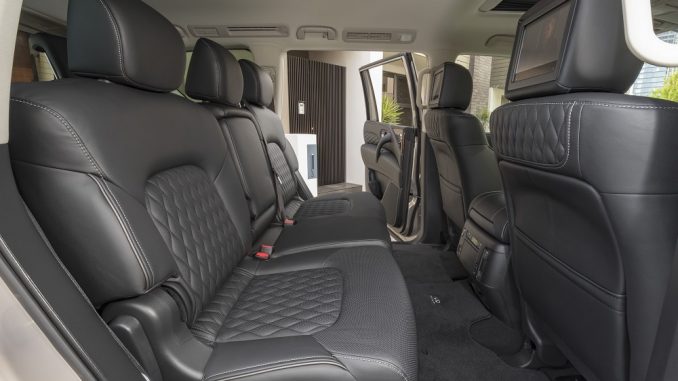 OK, the Infiniti QX80 is no eco-warrior…in fact it really is the ‘anti-Prius’!

Under the bonnet is the same 5.6 litre V8 engine that featured in the superseded version and once again it is mated to a seven-speed auto transmission.

You can do the math – big V8 petrol engine and a vehicle that weighs over 2.7 tonnes…yep, it does chew fuel.

Combined fuel consumption is listed at 14.5L/100km, expect to use somewhere in the 16s or 17s when driving the big girl in traffic.

We took the vehicle on a genuine off-road trek on the launch and found it to be remarkably capable.

While off-road capability is unlikely to be a top priority for QX80 buyers, rest assured that this vehicle will be able to handle most conditions with assistance from low-range gearing, selectable terrain settings and hill descent control.

On the road the Infiniti rides along comfortably, however despite Infiniti telling us they had tightened up the suspension to me it felt pretty floaty, particularly in the bends.

There isn’t an ANCAP safety rating for the Infiniti QX80, though the vehicle comes with the aforementioned Autonomous Emergency Braking (forward and reverse), the around-view camera system and Rear Cross Traffic Alert. 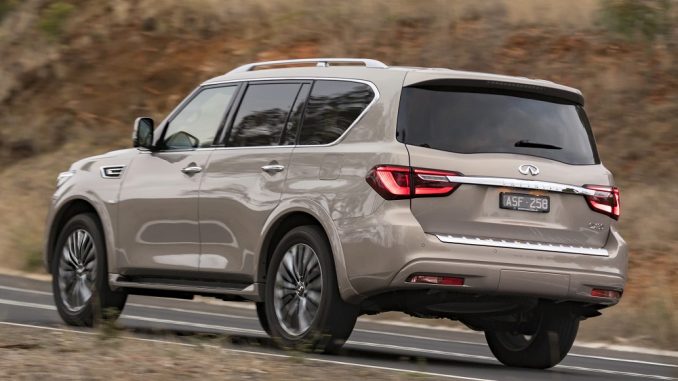 The Infiniti QX80 is never going to be a big seller, we’re talking about a fairly small cross section of buyers here.

If you’re one of those buyers then it makes sense to investigate the QX80 as it brings you most of the same features and presence that the others do, but just in a much more reasonably priced package.

And hey, at least it isn’t as ugly as it used to be!

March 2017 data shows healthy sales increases for Infiniti… Yes, they still have a way to go, however Infiniti is continuing to grow both global and Australian sales. VFACTS sales data show Infiniti Cars in […]

November 2015 another record month for Infiniti. With Infiniti car sales expected to rocket ahead with the arrival of the new Infiniti Q30 compact crossover, the recent sales performance of the brand would have to […]

Infiniti has launched an updated and improved version of the Infiniti Q50 into Australia and Behind the Wheel’s Chris Miller and Peter Hitchener have had a drive. You can check out their review of the […]