We’ve been covering the development of the Volkswagen T-Roc for three years and now the model is about to enter production.

Officially revealed last month, the new addition to the Volkswagen SUV range will make a public appearance at this week’s Frankfurt Motor Show.

Ahead of the unveiling, Volkswagen gave us some more important details for the upcoming model.

It’s now been confirmed that the T-Roc will be available in either two-wheel drive or all-wheel drive.

T‑Roc will also be the first Volkswagen SUV that will be available to order in two-tone paintwork with visually contrasting roof section (including the A‑pillars and exterior mirror housings).

While the SUV/crossover will also boast Front Assist and Lane Assist systems as standard.

Volkswagen tell us Traffic Jam Assist will be optional.

There will also be a new generation of Active Info Display and a sporty R-Line version too (as seen in the images top and bottom).

No word yet though on engines/transmissions for the T-Roc, only a promise from the German car company that they will be “agile and efficient”. 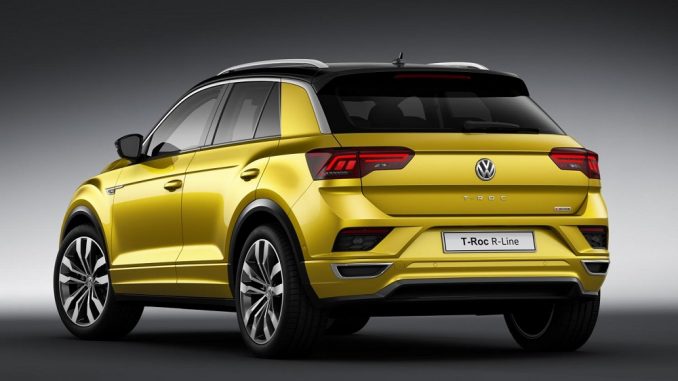 We will keep you updated though as further details come to hand on the 2018 Volkswagen T-Roc.

Stay up to date with the latest Volkswagen News at behindthewheel.com.au.

Volkswagen’s Atlas, a seven-seat SUV model that will take on the likes of the Toyota Kluger (Highlander in the U.S), Mazda CX-9, Kia Sorento, and Nissan Pathfinder, has been given a top safety score. The […]

Largest Polo ever debuts in Europe Volkswagen has given us a first look at its all-new sixth-generation Volkswagen Polo. Expected to land in Australia later in the year, the 2018 Volkswagen Polo is significantly larger […]

They’ve bounced back and bounced back in a big way, now Volkswagen has reported another strong month of sales. The latest global sales data shows Volkswagen Passenger Cars delivered 511,500 vehicles worldwide in October, that […]

December 21, 2015
Our Product of the Week is Workshop Wonders Belt Up Anti Slip Aerosol. We are smack bang in the middle of the hottest time of the year and that means all the components in your […]

July 25, 2015
The Behind the Wheel Product of the Week is the Wonder Wheels Perfection Kit. Nothing looks worse than brake dust and dirt all over your alloy wheels. Fortunately it’s not hard to bring your wheels […]