We’ve had the opportunity to chat with NASCAR legend and host of AmeriCARna on Discovery Turbo, Ray Evernham.

The two time Daytona 500 champion is now setting lap records on the television as the host of AmeriCARna, a great show that looks back at some of the most revolutionary moments in automotive culture.

Behind the Wheel’s Simon Lai caught up with Ray to talk about the show, the interesting automobiles and people he’s encountered, and his own love of cars…

Season 3 of AmeriCARna premiers at 7.30pm, June 4 on Discovery Turbo. 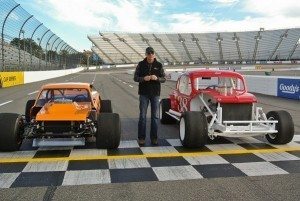 Driven by a passion for automobiles, Ray Evernham started working on short track race cars at age 15 and never looked back.

Since then, he has designed, built and driven some of the most advanced race cars known to man.

In 1983, Evernham worked with Roger Penske and Jay Signore to resurrect the International Race of Champions (IROC) series.

The experience taught Evernham, as team manager, the value of team success and priceless lessons in the business of racing. In 1993, Ray was offered the opportunity to team with, up and coming driver, Jeff Gordon as his crew chief at Hendrick Motorsports.

He would go on to revolutionize the crew chief role at NASCAR’s highest level of competition, as leader of the Rainbow Warriors. During his tenure with Gordon, he earned three championships and 47 wins in 216 NASCAR Cup series starts, including two Daytona 500 victories and the inaugural Brickyard 400.

His success earned him crew chief of the decade honors in 2000, and his innovative work with pit crews continues to set the performance standard today. His thumbprint also remains on engineering systems used throughout the industry.

In 2000, Evernham’s quest for personal growth and challenge drove him to take the ultimate risk, team ownership.

Relying on his own unique experiences as a driver and leader, along with his self-prescribed “20 points for success,” his goal was not only to build a championship calibre race team but a performance and technology based organization to transform the industry.

Ray teamed up with Daimler Chrysler performance brand Dodge to spearhead the unproven manufacturer’s re-entry into NASCAR racing from start to finish. In less than 500 days, Evernham Motorsports was a reality.

A historic Daytona 500 pole at the team’s 2001 debut set the tone for the organization with Bill Elliott behind the wheel. Evernham Motorsports blazed a new trail in performance by creating an environment where technology and racing were co-dependent.

In 2006, the media voted Ray Evernham the greatest crew chief of all time, an honour he believes to be his highest recognition to date. In 2014, following a five-year absence from the competition side of NASCAR, Ray accepted a consulting position at Hendrick Motorsports.

Now through his TV show AmeriCarna on Discovery Turbo, Ray gets to share his passion for automobiles and reveal the untold stories of cars that have so heavily influenced American culture as we know it today.

Behind the Wheel podcast 099

Behind the Wheel podcast 300

Behind the Wheel podcast 300 is here! This week we look at Toyota and just why Australians are so rusted on to the brand. Catch reviews of the Kia Soul and as part of Chris […]

Behind the Wheel podcast 105