Owners of 2013 Nissan Pathfinder (R52 series) SUVs are looking at a return to their Nissan dealership to have a possible issue with their vehicles tail lights attended to. 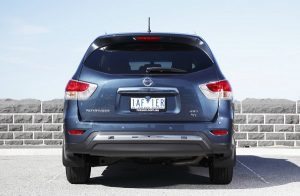 Affecting vehicles built in May 2013, the Nissan Pathfinder recall is being overseen by the Australian Competition and Consumer Commission (ACCC) and affects only a small number of Nissan Pathfinders sold in Australia.

This could cause the stop lamps to remain illuminated when the brakes are not being applied. This condition could also negate the brake-shift interlock function.

Movement of the gear selector out of ‘Park’ position, or starting of the engine, without depressing the brake pedal could pose an accident hazard.

The rectification will be at no cost to owners.

Porsche Cayenne and Panamera hybrid recalled. A recall has been launched for two Porsche hybrid models after it was found a fuel leak could pose a potential fire hazard. Affecting the Porsche Cayenne S Hybrid […]

Chrysler 300 SRT recalled over possibly dangerous electrical fault. A recall of current series Chrysler 300 SRT and SRT8 models has begun after an issue with the Daytime Running Lights was identified. Affecting 2015 and […]

Yamaha’s popular learner approved MT03LA and YZF-R3A have both been recalled because of an apparent weakness in the clutch and oil pump assemblies. The same 321cc twin cylinder engine is used in both bikes, and Yamaha states that the […]