Mitsubishi will soon have a new offering for Australian compact SUV buyers – the Mitsubishi Eclipse Cross.

The all-new model debuted at the Geneva Motor Show earlier in the year, now, ahead of hitting the Australian market later in the year, Mitsubishi has been putting the vehicle to the test on Aussie roads and beyond.

They say they want to make sure the Eclipse Cross is perfectly tuned for Australian conditions. 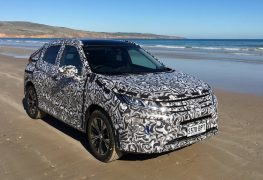 In a statement released by Mitsubishi Motors Australia, the Japanese car company said its local engineers have been testing the new offering to get information on how the vehicle performs on Australia’s unique roads and tracks.

At this stage, there is no word on pricing and specification details for the all-new offering, as always, we will bring you all the latest details as they come to hand.

What we do know however is that the model is likely to be offered with the choice of a 1.5 litre turbo-petrol engine mated to a CVT auto.

A 2.2 litre turbo-diesel is also expected to be in the mix too, that engine coming exclusively with an eight-speed auto transmission.

While connectivity is expected to be covered with the standard fitment of Apple CarPlay and Android Auto.

Stay up to date directly in our Mitsubishi Eclipse Cross News section and keep an eye on Mitsubishi News as well.

2014 Mitsubishi Lancer range unveiled with the mid-spec LX and VRX picking up new standard features. Mitsubishi has given the Lancer a refresh adding a few extra features and sharpening the models pricing. Available in […]

The Mitsubishi Rosa has managed to get the jump on arch-rival, the Toyota Coaster, in August 2016 bus sales by just a single unit. VFACTS sales data released today shows the Rosa was delivered to […]