Although once associated only with sports cars, Lamborghini has revealed its first SUV to Australia – the Urus.

If you haven’t got an SUV on your model list, you are missing out on a big market segment.

It is nearly 16 years since Porsche launched the Cayenne, and it has taken many years for other luxury brands to catch up, but Lamborghini has finally hit the streets with a bang.

The Urus is named after one of the large, wild ancestors of domestic cattle and thus continues the brand image under the symbol of Lamborghini – the Bull.

It is not just a marketing exercise of a bland, family shopping car with a name to cash in on the brand.

They describe it as a super SUV and with a high performance V8, impressive brakes and suspension it is said to be the fastest SUV on the market.

It will start to appear on Australian roads in the last quarter of 2018 but that will be with owners who have already ordered their model.

If you order one now you won’t see it for about a year.

It is hard to make an SUV look good. Lamborghini has done better than most.

The body of the vehicle, perched on 21” to 23” wheels, sits up as an SUV should and is large in appearance while the roof line has a cut down look which begins to gently slope down from the B pillar followed by a sharper slope after the C pillar, almost in hatch back style.

Several other German luxury manufacturers have tried this but the results look awkward and contrived.

The Lamborghini Urus has achieved a balance of high riding SUV with a sporty roof line.

From the front, the large pods on the side blend in with the grille, unlike their sports cars, and they use design bars to great effect.

The pods have several tuning-fork shaped bars that produce a striking look.

Aficionados will notice the mound of the bonnet which is reminiscent of the Miura and Aventador and accented diagonal bonnet lines, found originally on the Countach.

The hexagonal wheel arches at both front and rear are a significant design detail taken from the LM002 and Countach.

The side hind-quarters and the rear of the vehicle have some aggressive lines without being over-the-top.

Prominent at the back is the vents on either side and the diffuser which is inspired by Lamborghini race cars, and integrates into double round exhaust pipes. 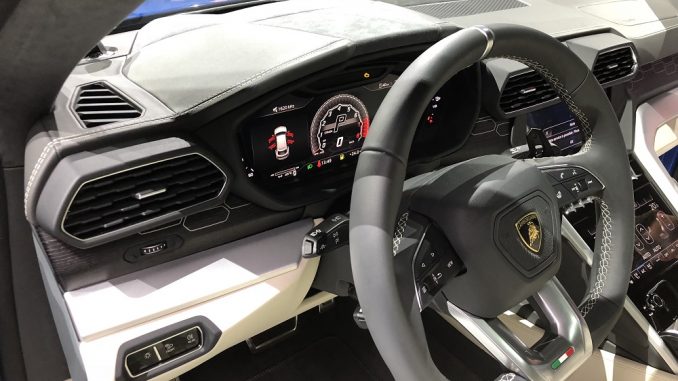 The interior clearly has a feel of luxury. The model they displayed had white leather that, when clean, looks very plush including the Lamborghini logo pressed into the headrests.

When you move to the driver’s position you are surrounded by a busy layout.

Apart from the digital screen in front of the driver, there are two screens in the centre which are adequate but not large, certainly not in the Tesla sense. Below the screens is a surprising number of switches and levers. T

he device for operating the cursor on the screens and for entering addresses and other information and the lever type controls besides it, gives a feeling of a jet fighter cock-pit.

This is being sold as a potential car for a family and has ISOFIX seat-belt securing points. 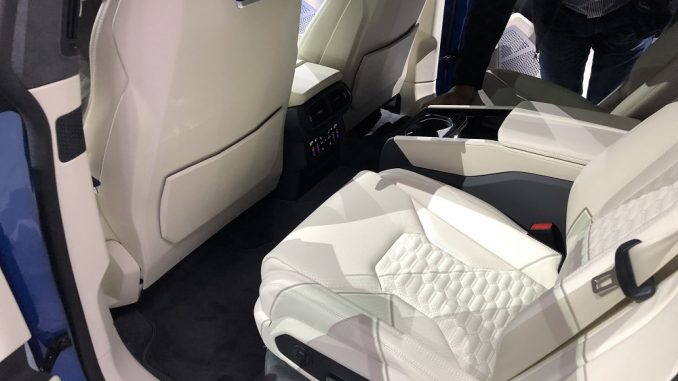 For a vehicle that starts at $390,000 plus on-road costs in Australia it has some good features but quite a number are optional extras.

A sound system featuring eight speakers, driven by four channels comes as standard but a high-end Bang & Olufsen Sound System with 3D sound and 1,700 watt output has to be specified, with 21 fully active speakers.

A head up display is optional as is a TV tuner, DAB and CI card reader and a smartphone interface.

Manufactures will wax lyrical about their specially designed entertainment interfaces but it is encouraging to note that quite a few are now including Apple Carplay and Android Auto which allows a person the familiarity (and less distraction) of the interface they use on their phones.

The optional Lamborghini Smartphone Interface has this feature including the Baidu-Carlife (China).

Although Lamborghini have not provided a Urus for testing in Australia yet, on paper at least, they have not backed away from their performance heritage.

The Urus is the first Lambo to get a turbocharged engine. The 4.0 litre V8 twin-turbo engine delivers 478 kW and a massive 850 Nm of torque.

They say they also spent a long time getting the sound of the engine just right.

The material from Lamborghini keeps quoting the vehicle weight as “less than 2,200kgs”. If you dig into the figures they are getting finicky about 3kgs, as it weighs 2,197 kgs. 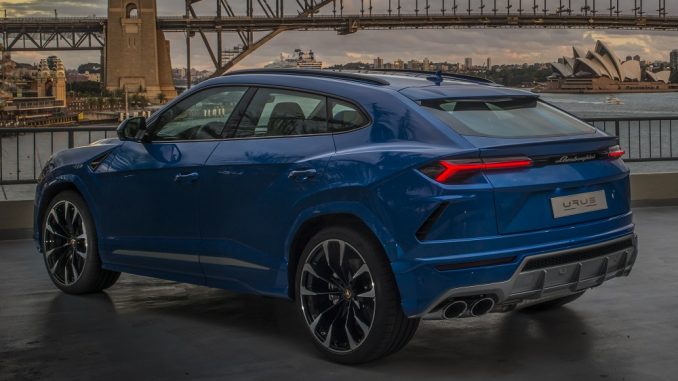 There has been constant talk by Lamborghini executives about how they wanted to capture the DNA of the brand, in their adventure into the SUV market.

From the looks of it they have succeeded.

The Urus has style which is strong enough but not too far “out there” as some of their sports cars have been.

The engine and suspension appear to have the goods to provide sports car performance and the interior looks like it has not compromised on cost.

Lamborghini say that 70% of the people who have order this vehicle are new to the brand which says it is already doing its job perfectly well.

Vehicle number 2,000 created and is headed for the US. The 2,000th Lamborghini Aventador LP 700-4 has rolled off the production line and is now headed to a lucky new owner in the United States. […]

The development time for the inaugural Lamborghini SUV seems to have taken forever, now though comes official confirmation that the Lamborghini Urus will finally be revealed in December. Lamborghini has sent through the above image […]

September 2, 2016
Your car just isn’t finished until you get a set of Altrex Number Plate Protectors onto it! Altrex has been the leader in number plate protectors for years now and there’s some really good reasons […]