I remember back in the mid-2000’s when the only people who would even consider a South Korean-built car, i.e. a Kia or a Hyundai, were those people on a seriously tight car buying budget.

Models like the Sonata, Elantra, Excel, Rio and Sportage were a popular alternative to buying a secondhand car and came with standard gear like free air-conditioning (still an option on many other new cars).

I can tell you from personal experience with all of those models (and more), they were dreadful cars, really bad.

But, by the early part of this decade the South Koreans got it together.

They started putting more resources into the look and feel of their cars and improved the way they drove.

You can see today that the overwhelming majority of car buyers consider Korean cars on-par with the Japanese, a situation that would have been unthinkable a little over a decade ago.

Speaking of the Japanese…they built and imported into Australia more than their fare share of sub-par, rust prone, cars before they too got their act together towards the end of the 1980s.

Now its the Chinese manufacturers that are on the verge of hitting our market in a big way.

Like the Koreans, and the Japanese before them, the first Chinese cars to arrive here, from brands like Geely and Chery, were miles behind where they needed to be.

Now, nearly a decade on, and with a number of different Chinese brands trying to establish themselves here, you can see they are starting to get some ascendancy.

I was recently in attendance at the Beijing Auto Show and was mesmerized by the sheer volume of different brands that are fighting it out for a share of the huge Chinese car market.

Domestic brands, most of which we’ve never seen in Australia, fight it out with the best of Europe, Japan, South Korea and the U.S.A. for a slice of the 24 million plus annual sales.

But while local sales are a big priority, major players like Great Wall Motors can see the opportunities in markets like Australia and are spending the dollars to improve their products. On the trip we got to visit the HAVAL R&D Centre (as seen above) and had a chat with some of the European engineers that Great Wall has poached from the likes of Daimler and BMW.

These engineers, including the highly-respected Chief Engineer, Koen Kramer, are working on boosting the driving dynamics of a new generation of vehicles.

Those vehicles include a keenly-anticipated new-gen Great Wall Motors ute, and more fresh product from their SUV brand, HAVAL.

Great Wall also has a brand new premium SUV brand that has just been launched and could be coming our way – WEY.

I also got the chance to get up close to, and even drive these new HAVAL products, including the H4 (which sadly is unlikely to come to Australia) and the updated H6.

I can report that these models are another step in the right direction.

Our tour also included a look inside the HAVAL factory, I was very impressed. I have been to many other factories, including those of famed European sports car manufacturers, and I can report that the HAVAL facility is absolutely at the cutting edge.

Impressively, we were encouraged to take photos and videos inside the factory…something almost unheard of in the industry.

It must also be remembered too that the Chinese are years ahead of us in regards to electric vehicles.

For example, Great Wall Motors has a fully-electric small car called the C30EV (seen below).

The little offering delivers a healthy 120kW/280Nm and a drive range of up to 270km! 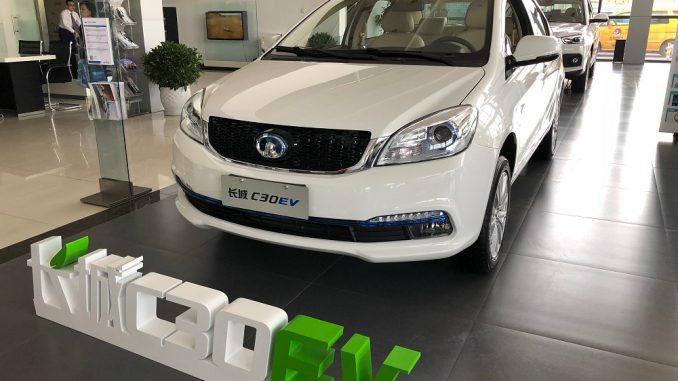 While WEY already has a plug-in hybrid SUV on the market – the P8 (seen above).

Yes, there are some challenges that stand in front of the Chinese brands, namely a lack of dealerships in Australia, and a few legacy models that aren’t a great example of where the Chinese manufacturers really are at in 2018.

While I believe they all have no choice but to match Kia’s famed seven-year warranty if they want people to take them more seriously.

If they can do that, and keep bringing improved product into Australia, with full five-star ANCAP safety ratings, and ultra-competitive pricing, I can only see the Chinese brands replicating what the Japanese and Koreans have already achieved.