Canadian bank Scotiabank has released a report predicting global car sales figures to continue to grow in 2017 leading to an annual record for the eighth consecutive year.

This comes off the back of sharp acceleration in sales in the last few months of 2016 but are expected to slow somewhat this year.

Returns will be boosted by renewed upturn in emerging markets for the first time since 2012, such as eastern Europe, Asia and South America.

However, sales volumes in China are forecast to slow for the first time since 2008.

The US should experience increased replacement demand for the third year, while neighbours Canada and Mexico will slow due to price rises in new cars and light trucks in Canada and rising interest rates, weak currency and fiscal restraint south of the border. 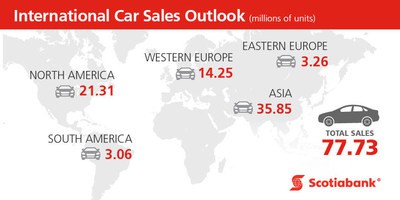