We road test the most user friendly drone…

Okay, so it’s not car related by the EHang GhostDrone 2.0 VR is such a cool piece of tech we had to share it with you.

Drones have grown immensely in popularity in recent years, used to film all manner of things from an aerial perspective.

However, if you’ve ever tried to fly one, let alone film quality footage, you’ll know it’s not an easy task especially when it comes to take offs and landings.

The people at Chinese company EHang have solved that problem creating a drone that is operable by almost anyone.

All you need is a smartphone.

No kidding. Just download the accompanying app and you can pilot the Ghostdrone with your Andriod or iOS phone without the need to master a remote controller.

There is a one touch button to launch it into the air smoothly and controlled at ascending to a fixed height and hovering to await your next command.

Just run your finger over the virtual joystick to fly it in the desired direction and a graduated meter will determine the height. It’s as simple as that!

To make the Ghostdrone return, press another button and the drone will automatically return to the spot it started from as well as land itself thanks to a built-in GPS. No cumbersome and ungraceful landings.

The Ghostdrone is capable of a distance of 1km and heights of 500m as well as speeds of 40kph and 70kph in manual mode.

Battery life is approximately 25 mins but the unit will automatically return to base when it detects less than 20 percent battery life left.

Check out this short clip to see the Ghostdrone in action.

But that isn’t the limit of its capabilities.

Switch it to ‘Avatar mode’ and the drone will move the way your phone moves meaning if you tilt or rotate your phone, the Ghostdrone will do the same.

You can of course control the camera on your smartphone but there is another, more fun way of doing it.

Included in the package are a pair of virtual reality goggles that can control the pitch of the camera.

While one person operates the drone from the phone another dons the goggles allowing them to not only have a bird’s eye view but control the camera by tilting their head up or down.

The camera quality is unquestionable with 4K Ultra High Definition from the gimbal mounted spherical camera.

The EHang GhostDrone is revolutionary and has changed the ease of operation of drones and accessibility to the masses.

High end devices loaded with features aren’t only the domain of serious photographers or those with cash to burn.

Anyone can now operate a drone easily and accurately while recording quality without making too much of an investment. 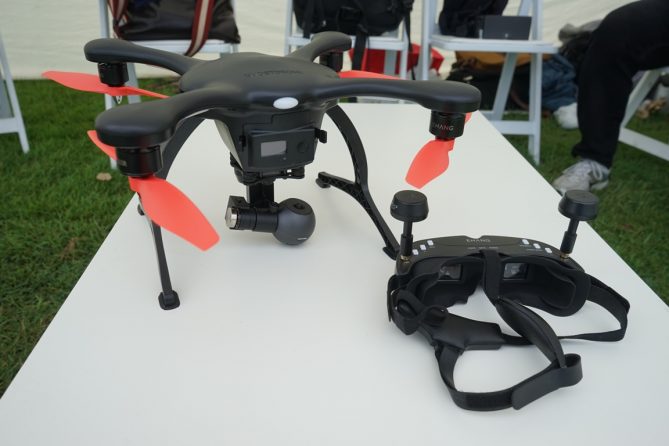 For new owners, there’s another incentive with EHang offering a special 12 month warranty where they will repair the device up to three times in the first year if it crashes, breaks, collides, you name it, even if it’s your fault.

And to carry it safely when not in use a bespoke backpack accessory is also available, able to house the drone without the removal of the blades.

EHang GhostDrone 2.0 VR retails for $999 for a limited time and is only available online from the EHang website.