It’s already confirmed for production, now we’ve got a fairly good look at what BMW’s long-rumored flagship X7 large SUV might look like.

Unveiled overnight, the concept car will make an official debut at this month’s Frankfurt Motor Show.

The concept X7, described officially as being “a taste of the production version”, has a couple of important attributes worth mentioning.

Primarily, the three-row concept vehicle has just six seats, watch for that to change up to seven seats in the production version.

It also sports a new-look front that differs quite significantly from the other existing BMW SUVs with a much more elongated kidney-grille.

BMW tell us this front-end shows design cues for the brand into the future. 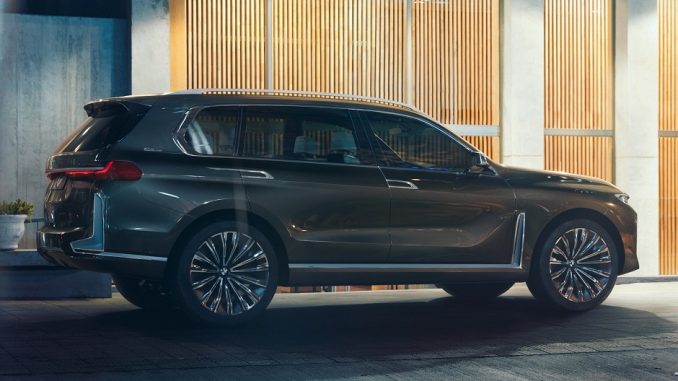 We can also expect the production version to feature traditional petrol and diesel engines, along with the similar hybrid powertrain found in the concept.

BMW boss, Ian Robertson, says the X7 is the natural progression for the X range.

“The X family’s new top model extends BMW’s offering in the luxury class and redefines the concept of luxury for the BMW brand and beyond.

Some of the highlights inside the concept include a huge 12.3” instrument cluster, the rear seat entertainment screens and the massive panoramic glass roof. We will bring you more details on the new BMW X7 as they come to hand in our BMW X7 News section.

Stay up to date with the latest BMW News at behindthewheel.com.au.

BMW Australia dealerships will start receiving a slightly tweaked version of the BMW 4 Series soon. Announced today in Germany, the biggest change comes to the BMW 4 Series Coupe/Gran Coupe suspension which is now […]

The 2018 BMW i3 will debut at next month’s Frankfurt Auto Show and the big news is that the electric car will welcome a new sporty variant from November. While not yet officially confirmed for […]

June 20, 2017
Perk Fresh Link is Product of the Week One of the oldest and most tired car industry cliches is that the new car smell is “the most expensive perfume in the world”. True in a […]

December 21, 2017
Remember that episode of Seinfeld when Jerry’s car smelt so bad that nothing he did could fix the problem? We reckon if he had this week’s Car Product of the Week – CarPlan Odour Eliminator […]