Right now, Toyota has its environmental commitments covered with a range of hybrid vehicles, the most affordable of which is the Prius C that sells from $24,040.

The more luxurious and better equipped i-Tech model as driven here goes for $26,540.

If you hate going to the servo, one of these little jiggers is the go.

They sip fuel at ridiculously low rates and make handy ‘shopping trolleys’ with the potential to be driven with confidence on the freeway as long as you don’t expect too much.

Looks a bit like a Ford Fiesta at the front and like someone chopped off its tail but the overall appearance is inoffensive. Thank goodness they didn’t simply scale down the larger Prius.

The Prius C is a five door hatch that can fit in tight spots due to its compact dimensions and easy handling.

The styling won’t win any beauty contests but is possibly the least confronting of Toyota’s three Prius models.

Toyota tweaked Prius C recently with revisions to the front and rear along with a stronger chassis with more welds and other improvements. 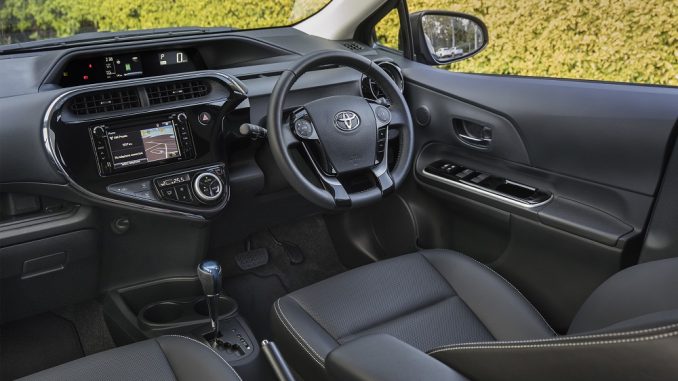 Inside is a fairly generic space with a predominance of grey plastic surfaces but a decent looking centre screen and a new, sporty wheel with a slightly oval shape and a number of buttons to control various functions.

The instrument pod is set into the centre of the dash with a digital speedo and other info’ displayed. Some soft touch fascia are fitted this time around.

It’s easy to see all the readouts and the whole ‘cockpit’ is functional and fairly easy to use. Plenty of storage dots the cabin.

Sat-nav, the good SUNA system, is included along with ToyotaLink connectivity (also in the base model).

The iTech has LED head lights and other goodies over and above its cheaper stablemate.

Not a lot of driver assist technology but the economy coaching tool is cool to use.

Rolls on 15-inch alloys as opposed to steelies on the base Prius C.

Power comes from a 1.5-litre petrol four cylinder that uses the efficiency boosting Atkinson Cycle for combustion… and an electric boost motor for starting off and in coasting and reversing applications.

They figured out a way to keep the aircon’ running when the petrol engine is stopped – for a short time.

Combined output of the petrol engine and electric motor is 74kW – quite a handy output for a car this size.

Toyota doesn’t offer a combined torque figure but it feels like 160Nm which is responsible for propelling this 1120kg small hatch.

The really, really good thing is how low fuel consumption can go.

On one 25km run I actually achieved an average of 2.6-litres/100km – astonishing given my heavy right foot.

The only thing I have trouble with is the slurring CVT auto – it’s the so called “rubber band” type that revs up the engine with acceleration trying to catch up.

A Sport mode is available as well as Eco, Normal and EV, with the latter  taking you perhaps 2km at speeds under 40km/h.

Gets a five star ANCAP crash rating but misses out on advanced driver assist technology which the original version predates by a few years.

Still a safe car with strong scores in most ANCAP tests. Both models have a reverse camera.

Quite impressive for such a small car designed a while ago. 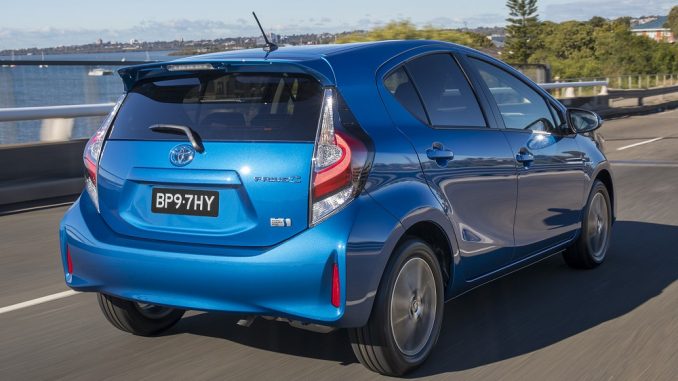 This is a surprising little car and very handy used in its natural environment – around town.

Zip here, park, zip there and don’t go to the servo very often. Big tick for that.

Two new colours joined the Toyota Prius C palette late last year including the striking yellow of the test car. Makes you stand out, that’s for sure and you don’t have to plug it in or worry about how far it will go on a charge….

The Toyota Prado will end 2017 as the nation’s best-selling large SUV, but Toyota will take the model into the new year with sharper prices, refreshed styling and improved equipment. Toyota Australia today confirmed price […]

There’s always talk the Toyota HiLux might not cling on to its long-held mantle as the best-selling ute in Australia, however it seems that whenever that’s said the Toyota manages to find another gear. On […]

Buying a new vehicle that sits around the Luxury Car Tax (LCT) threshold should be a little cheaper from this week. For the new financial year, the LCT threshold increased by $948 to $64,132. While […]