Toyota Kluger was first released to Australia in 2003 and the latest version of the Kluger was first introduced in 2014 with a significant upgrade in early 2017. We had on test the Grande model which is the range topping version.

Let’s just go with a quick overview to start.

The Kluger looks good for a family wagon, drives with almost car like handling and ride, has an abundance of standard comfort and safety features and sells in droves for Toyota. 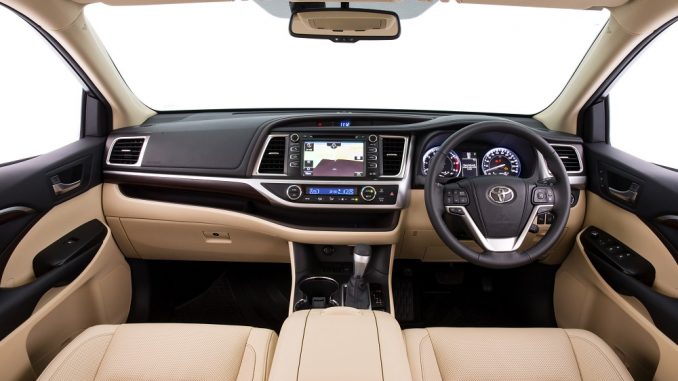 Inside the 2018 Toyota Kluger Grande is comfortable, roomy and familiar.

The driver’s seat has plenty of adjustments and with the height and reach adjustable steering wheel every driver should be able to find their perfect driving position.

The dash is easy to read and simple to navigate.

The centre stack houses the infotainment system that unlike a lot of the Toyota systems, looks integrated in to the dash. It also does look a little plastic though.

Bluetooth connection is a breeze.

Visibility is good with the new panoramic view monitor for Grande.

This system uses four cameras (front, rear and in the side mirrors) to display a 360-degree bird’s-eye view of the vehicle surroundings when driving at low speeds – especially useful for negotiating tight parking spots.

Even for taller drivers such as myself there is ample head and shoulder room.

Front seats are now air conditioned. The second row of seats are again comfortable, even for three.

With the flat floor there is room for the middle passenger feet as well.

With the driver’s seat fully back there is enough room for me to sit behind myself in comfort.

The third row of seats is amongst the best in class and both rear rows now benefit from a DVD player to keep the troops entertained.

In line with the perfect SUV theory there are cup holders and storage bins everywhere.

The centre console is probably the biggest and best designed in any vehicle.

It serves as a great arm rest and is cavernous as well as practical.

The list of standard features on the Toyota Kluger Grande is impressive and includes:

In what is becoming a new sales trend, the Kluger is becoming more popular as a 2WD as well as its traditional AWD roots.

The 3.5L V6 petrol engine produces 218kW/350Nm. The Kluger, in an effort to improve driveability and economy, now has an eight-speed automatic transmission.

It isn’t a powerhouse or exciting but neither does it lag the traffic or feel sluggish. It is adequate for the job. As mentioned the Kluger now is available in both 2WD and AWD versions.

It is really an AWD SUV for forest trails, down to the snow for a weekend, some sand driving and towing the Jet Ski.

The AWD system in the Kluger is the Dynamic Torque Control AWD.

It really is a safety feature as much as anything.

The recent upgrade has seen the safety of the Grande improved.

The Toyota Kluger Grande now has rear cross-traffic alert, a system to aid reversing out of a parking space.

Given the proximity of where most of the Kluger’s are to be used this is a major addition. School car parks, shopping centres, local playgrounds.

Places where there is a lot of kids running around and cars constantly moving around. This is a huge bonus.

Not So Good Bits: It could be described as the perfect family wagon. It does everything with a minimum of fuss, isn’t fazed by anything in its daily life and transports the family in comfort and safety.

It is loaded with features for the family and isn’t too expensive. It is however a little boring and still is a bit heavier on fuel than alternative diesel engine SUV’s.

The small SUV/crossover market will receive a shake up early next year with the all-new Toyota C-HR set to enter the fray. Featuring distinctive styling and a turbo-petrol engine, Toyota Australia today confirmed the new […]

One of our favourite micro cars to get a fresh new look. It consistently comes up as one of our ‘best buys’, now the impressive little Toyota Yaris looks set for a facelift and a […]

Going green is nowhere near as expensive as it was when the original Toyota Prius hit the market. Today, this smaller version of the Toyota hybrid hatch, the Toyota Prius c, can be yours from […]