Aussies are in love with beefed-up dual-cab 4×4 utes and now the Toyota HiLux has added three new highly-specified variants to its range.

Launched this week in South Australia, the new vehicles include the HiLux Rogue, the Rugged and the Rugged X.

All three variants are permanent fixtures in the Toyota HiLux range and all three are aimed at different buyers with different needs from their ‘truck’.

More details on the new HiLux models can be found here.

On the launch I spent the most amount of time in the Rugged X, we hope to bring you reviews of the other two offerings in the not too distant future.

The 2018 Toyota HiLux Rugged X is based on the HiLux SR5 and adds a number of features and styling tweaks to set it apart from its more mainstream sister.

The bull-bar, unique front grille, decals, sports bar, red recovery hooks, snorkel, badges and black/polished alloy wheels make sure you get noticed out on the roads. 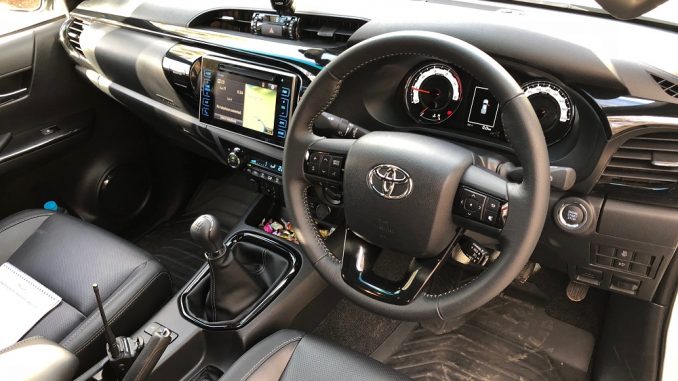 Toyota has resisted the temptation to fiddle with the interior too much, instead opting to give Rugged X buyers leather accented seats, there’s also a new design instrument cluster, metallic black ornamentation and black headlining.

This generation HiLux suffers from rather short seat bases up front and this affects under thigh support for taller drivers/passengers.

I’m also not a huge fan of the infotainment system control buttons on each side of the screen…is a volume knob really something that had to be deleted?

Storage areas in the HiLux cab are only adequate, the door pockets in particular are smaller than what I might expect in a vehicle like this.

And getting three adults in the rear is an exercise due to a lack of shoulder and legroom.

Good bits though include easy to read gauges, well-positioned controls, easy to use climate control buttons/knobs and very good fit and finish.

With the Rugged X adding the aforementioned leather accented seats, as well as the snorkel, bull-bar and sports bar etc. 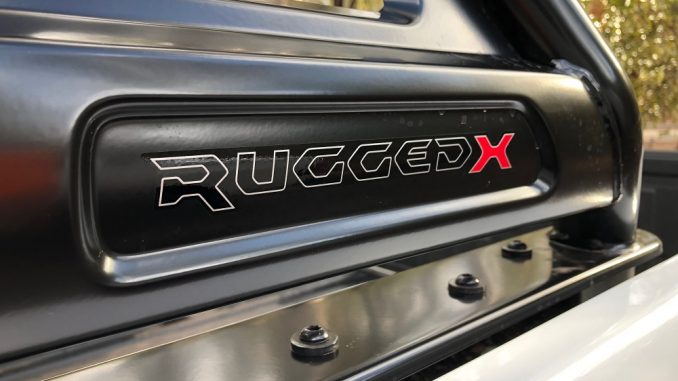 The new variants all run exactly the same powertrain as a standard HiLux SR5 – that’s a 2.8 litre turbo diesel that produces 130kW/450Nm (420Nm with manual transmission).

A manual transmission is available in the Rugged and Rugged X incidentally, but not in the Rogue.

My preference is the manual transmission over the auto as it enables you to better control the power and torque available to you, even taking into account the 30Nm torque penalty.

Either way, to be honest, the engine is only adequate in either configuration.

Perhaps when you start stepping up to these top end/high-priced type offerings your expectations grow, but I think the rest of the package is let down a bit by a lack of grunt.

The engine also doesn’t sound great…not normally a major concern among ute buyers, but here in these “fun machines” it seems just a bit underdone.

Rivals such as the Volkswagen Amarok pack much more powerful engines and this could still be a major factor among potential buyers in this end of the market.

The Toyota is also let down a bit with leaf-spring rear suspension and rear drum brakes, compare the ride and handling of the HiLux to the recently updated Nissan Navara and you’ll notice a huge difference.

Another thing that tends to let the HiLux down is the amount of wind noise around the windscreen at highway speeds, this is exacerbated further when the snorkel is fitted (as the Rugged X has).

All three new variants in the HiLux continue to be covered by a five-star ANCAP safety rating. The top-selling vehicle in Australia now has three interesting and new ‘halo’ variants and I can see them being a commercial success for Toyota.

The HiLux is a good vehicle, it performs well in almost every aspect, but equally doesn’t really excel in any particular way either.

The Rugged X version carries a hefty price tag (as do the other two new offerings), however you would be unlikely to be in front if you sourced equivalent components and added these to a standard SR5 version.

At these dollars I’m expecting a lot of vehicle and I’m not 100% sure that the Rugged X completely met my expectations.

Toyota Prado Altitude back for 2017

Ever-popular special edition Prado back once again… As John Laws famously said “when you’re on a good thing, stick with it”, now the car company he promoted for years is sticking with that philosophy with […]