There’s a lot to like about the new-generation Toyota Camry, however I have to say straight off the bat that the V6 wouldn’t be my pick.

A respected colleague of mine has raved about the hybrid version (review coming soon), I’m yet to have a drive of the petrol-electric powered one.

I have however had a couple of goes in the four-cylinder model and given the choice between it and the 3.5 litre V6 I would have to go the lower-capacity engine.

The top-spec 2018 Toyota Camry SL doesn’t vary greatly from the other variants and that is no bad thing.

Toyota designers have delivered a head-turning new Camry that you wouldn’t feel ashamed to turn up to a meeting or party in.

The low door line and the big windows make for a car that looks open and inviting…though window tint is probably a good investment for Aussie buyers. 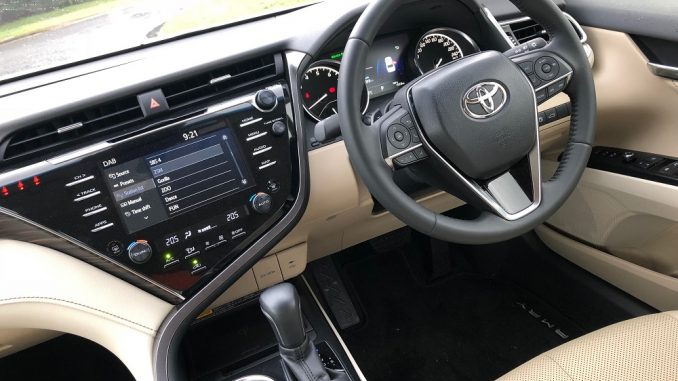 The SL grade car gets a great feature – inductive smartphone charging, simply pop your phone on the pad at the front of the centre console and so long as your phone is compatible (i.e. one of the later models) you should be able to keep it charged on the go without fiddling with a charger cord.

The centre console storage bin is very sizable, the glove box too is better than reasonable, though the door pockets aren’t big, or well-shaped for maximum storage.

The top-spec Toyota Camry comes jammed with luxury and convenience features including the aforementioned inductive phone charging, you also get:

And all this comes on top of standard gear such as Autonomous Emergency Braking and a reverse camera, unfortunately though Apple CarPlay/Android Auto don’t feature in any of the new Camrys. 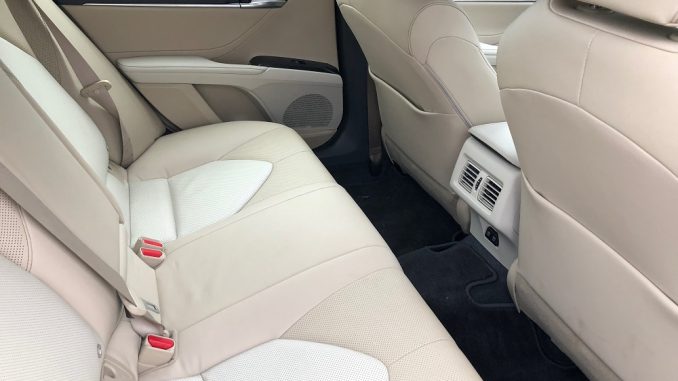 The 3.5 litre V6 engine in the new Camry produces a hefty 224kW/362Nm and is mated exclusively to an eight-speed auto transmission.

As is always the case with the Toyota V6, power comes on smoothly and you rarely feel like you need any more go.

The new eight-speed auto also works quite well with the engine, especially in regards to finding the right ratio when more go is required.

There are three drive modes – Eco, Normal and Sport.

Fuel consumption though remains an issue…I used over 13 litres per 100km in my time in the V6 Toyota Camry and that was just with normal/easy use.

If the thirst isn’t enough to make you take a really close look at the benefits of the much more frugal four-cylinder version, then the dynamics of the car might be.

Where the smaller engine may not have the same power and torque outputs as the V6 it is a much lighter car – try 130kg!

And all that extra weight is right over the front wheels of the V6 and it really feels it. Back in the day the Toyota Camry needed the V6 engine to compete with the likes of Falcon and Commodore, those cars are now gone (in that form at least) and that means there’s no real need for this engine option in my opinion.

The four-cylinder version delivers enough get up and go for 99% of Toyota Camry buyers and is a lot more frugal, it will also save you up to around $4,000 off the purchase price!

The extra weight from the V6 also works to dull the really good driving dynamics that Toyota has extracted from the new car.

My advice? Give the V6 a miss. Check out my recent Camry 4-cylinder review here.

Early 2000’s Toyota Echo and RAV4 air-bag recall. Toyota Australia has announced a recall of just over 8,000 RAV4 and Echo models to fix a potential air-bag fault. The latest in a series of air-bag […]