They’ve taken over the taxi rank and plenty are used by various echelons of government but Toyota’s Hybrid Camry has yet to make real inroads with private buyers.

Buggered if I know why not.

Why should cabbies and bureaucrats have all the fun?

Whatever, that will undoubtedly change with the arrival of the strikingly handsome eighth generation Camry and in particular the hybrid version, arguably the pick of the litter.

Forget all that stuff about a ‘boring Camry’ because this new car, out of Japan, deserves serious consideration if only because of its astonishing fuel economy and the level of safety technology standard across the range.

Yep, sure looks like a Lexus, in fact, some might argue the Camry looks better than something of similar size from the premium Japanese brand.

The front has an aggressive look to it that continues as you sweep back along the car to the dramatic rear end. The overall effect is arresting. It’s a big car for a ‘medium’ size four door sedan and sits low to the road thanks to clever engineering and the repositioning of some key components. Big wheels set off the look as does a selection of appealing colours. It’s Lexus again inside with perhaps less emphasis on plush surfaces and more on style and function. There’s a delineated driver’s cockpit with conventional round dials and a supplementary stack in the middle of the curving dash with two screens, one of which houses the satnav and infotainment on the Ascent Sport driven.

They redesigned the seats, re-positioned the steering wheel to a more upright setting and used a mix of fascia materials to give the inside some relief. Plenty of room inside too in the back and the front. Perhaps the only niggle might be the high door sill heights that might be an issue for passengers of short stature. Safe though.

Ascent Sport is one up from the entry level model and gets plenty of kit including: 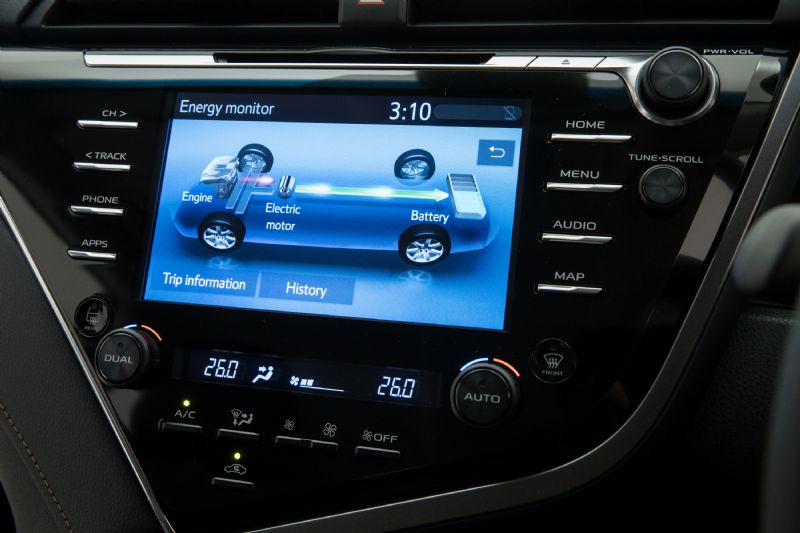 It’s a good thing to drive, make no mistake, with plenty of zip from the new, direct injection petrol four cylinder engine. The 2.5 litre has an electric hybrid drive attached for additional performance and improved fuel economy.

For the mechanically minded, additional efficiency comes from electrically operated variable cam timing instead of hydraulic or mechanical.

There’s 160kW on tap and what feels to be around 300Nm of torque from the combined powertrain outputs. That gives the Hybrid Camry performance nearly on par with the new 3.5-litre petrol V6 but with fuel economy down around the 4.2-litres/100km mark. I actually saw under 4.0 at one point during the test drive – quite astonishing in a car this size with this level of performance.

The stepped CVT transmission functions like a conventional auto but you don’t get paddle shift this far down the food chain.

Doesn’t really matter as the Camry Ascent Sport Hybrid allows you to simply leave it in D and just push the throttle with the required response instantly underfoot.

An auto glide function slips the powertrain into `neutral’ for downhill and some flat cruising applications. It saves even more fuel.

The new Camry Hybrid feels well balanced in dynamic terms as Toyota localised the suspension which now features a fully independent rear while the steering has been revised and larger brakes fitted. The overall effect is quite sporty with quick steering response and a controlled but still comfy ride. Minimal noise too.

With seven airbags and a comprehensive array of primary and secondary safety features, it’s no surprise that all Camry models score a five star ANCAP crash rating.

The Ascent Sport does pretty well on the advanced driver assist front with:

The new platform is lighter and stronger than before and other changes make this new Camry inherently safer than the previous model. 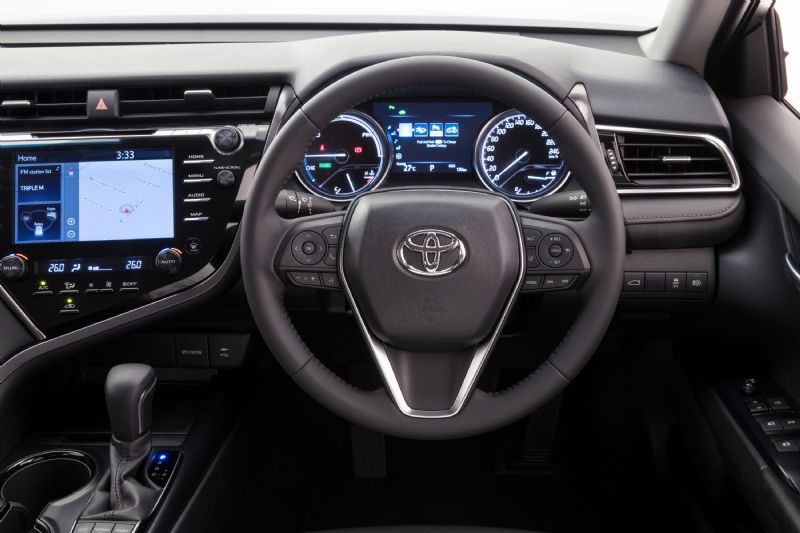 Having been a Toyota Camry disparager like just about everyone else I now have to change my attitude. It’s an excellent car and worthy of consideration by people wanting a four door sedan with strong performance, tidy dynamics and in the hybrid, excellent fuel. If you hate going into the servo like me, you’ll love this car and it’s not even a Prius.

Like the looks, the feel of it, even some of the colours are pretty out there in particular the deep blue.

And, as I like reporting, it’s made in Japan…. gotta be good although the Aussie made effort was good too.

The new-generation 2018 Toyota Camry has qualified for a maximum five-star ANCAP safety rating. Confirmed this morning by the Australian crash testing authority, the five-star rating applies to all variants of the new model, including […]

LandCruiser an Aussie favourite New sales data out of Japan shows Australia is so in love with the Toyota LandCruiser that we’ve purchased more than any other country on Earth! That’s a pretty amazing fact […]

Additional Toyota Yaris and Avensis Verso vehicles recalled. Toyota Australia has just announced more if its vehicles are affected by the massive Takata air-bag recall. The global recall has already seen hundreds of thousands of […]