New boss of Nissan Australia, Stephen Lester, has been brought in to deliver improved results and there are hopes this updated Nissan QASHQAI will help.

Originally launched back in 2014, the Nissan QASHQAI in those days had just one competitor, now, according to the Nissan chief, it has 28 to do battle against. 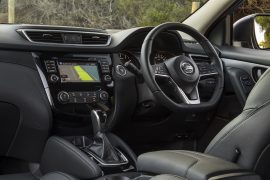 The diesel has been dropped for 2018.

This is a world-wide trend.

The front and rear ends have had tweaks, and safety equipment has received a big boost. The Nissan insignia provides the radar for the active cruise control.

The steering has a new “Active Return Control” which centres the wheel, like the old days.

Wheels have been updated across the range, and the top model gets sexy 19” alloys, just to let others know you’ve spent more.

The TI also has fabulously supple Nappa leather seats, but the that model will not be available until next year. This is a world-wide limitation due to production restraints.

There is no Apple CarPlay/Android Auto, which is a huge omission in a stiff market.

Inside, a smart new D shaped steering features redesigned buttons, which Nissan claims are more premium than before.

New stitching on the centre console adds to this new “premium” look, as do finishes on the dash, and doors, as well as the leather-booted gear selector.

All doors have 1-touch auto power windows, which can be remotely opened and closed from the key fob.

All models get new upholstery, with leather on the N-TEC and TI.

There is digital radio in all but the ST, which makes do with a 5” screen in lieu of the 7” unit in the other models. 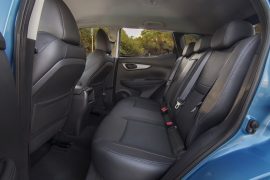 The electric steering now has Active Return Control to centre the wheel after cornering. It feels somewhat like the old-school hydraulic steering. Hoorah!

Bluetooth is easy to use, and of course you can stream music by Bluetooth and USB.

The grade you choose will depend on which of these are included.

A six-speed manual is available on the base model only, and a fairly capable CVT auto is available in all models.

The CVT can apply engine braking, as if you were changing down in gears in a traditional auto. Importantly, the CVT doesn’t make the engine rev embarrassingly as you cross an intersection.

On our drive through scenic Victoria, I felt that the ride is excellent thanks to retuned dampers, and, even on the most appalling of b-roads, Qashqai remained composed.

We hit one or two large potholes which were soaked up well.

Torque is delivered smoothly with enough power for overtaking, if done sensibly.

Dirt roads, and highways were equally dispatched with great alacrity, and the ride was pleasantly smooth.

Brakes were responsive without being too touchy, and the steering felt light. As with most electric steering, it lacked a little road feel.

We didn’t get a chance to try the Self-Parking on the N-TEC, but have used it on other cars. It is particularly handy in tight spots.

The cabin is fairly quiet thanks to thicker rear glass. In addition, there is extra sealing around the doors, and a clever vortex generator under the front bumper.

Most of the interior trim looks and feels good, and the switches and knobs have a nice feel of resistance.

Smart entry/start is one of my favourite features, and allows a driver to leave the key in his pocket.

Once you lock the door by pressing the door handle pad, you unlock by grabbing the same handle, and gently pulling.

Don’t be tempted to check if it is locked by tugging the door handle though. It will unlock again, sending your OCD in to a frenzy. 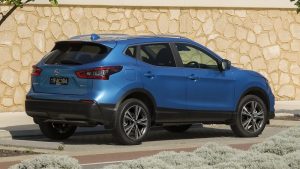 There are places where Nissan has skimped, such as power seats being only on the driver’s side, even in the top model.

I’ve already mentioned the CarPlay issue. However, there is a digital speedo which goes some way to assuaging my grief.

The range is priced to attract buyers who just want a decent drive experience without bells and whistles, yet caters for those wanting the full English in the upper models.

We might not be making complete cars in Australia anymore, but Australia still has a strong vehicle manufacturing industry. Iveco, Volvo and Mack all build trucks in Australia, and Nissan has a thriving casting plant […]

Over 4000 2013 Nissan Pathfinder SUV’s are being recalled in Australia to fix a potentially dangerous bonnet latch fault. Affecting Nissan Pathfinder vehicles built between May 2013 and November 2013, the Australian Competition and Consumer […]

Australian owners of current-series Nissan X-TRAIL vehicles are being asked to be cautious when using the Back Door Stay fitted to their vehicles tailgate. The subject of an official recall that is being overseen by […]

Mahindra PikUp gets big overhaul for 2018

Holden to bring Chevrolet back to Oz

Behind the Wheel Podcast 477

We’re getting close to naming 2017’s Car of the Year. The big announcement is only one week away, and we’ve got the last 6 nominations from Pete and Chris on this week’s show. Sean Poppit […]