Nissan Patrol is an Aussie favourite… or was, but outsiders conspired to make Nissan drop its diesel Patrol because they don’t like diesels in the US or Arab states.

OK for them because petrol there is cheap.

That’s not the case here as it goes up almost daily.

And therein lies the rub with Nissan’s current Y62 Patrol.

If someone else is paying the fuel bill, and you don’t want to drive long distances at one go then Patrol makes sense.

If it’s coming out of your pocket, stand by for a shock at the bowser.

That said, the Y62 Patrol is like a luxury liner on the road and hugely capable off road.

A restyle last year made Patrol a better looking device with a less confronting face and toned down styling.

They revisited the grille, lost the slanting fangs and changed the headlights and bumper.

Everything else is pretty much as it was when the Y62 was launched about five years back.

It looks OK from most angles but the fact remains it is a big bus with slab sides that offers tonnes of practicality and interior room for up to eight peeps.

Not as appealing to look at as its main (more expensive) diesel competitor, Toyota’s LandCruiser 200 series, Patrol does have presence on the road and once you get used to it, you could love it. 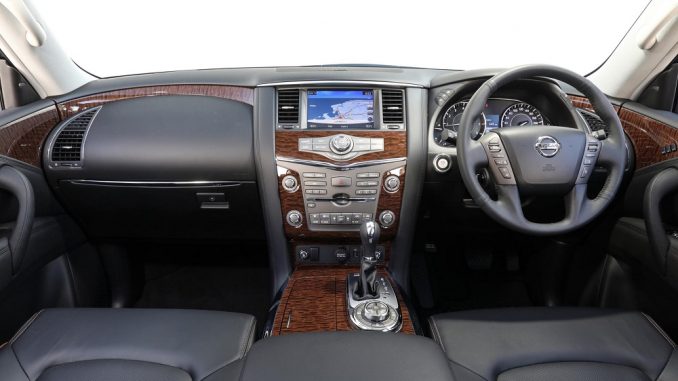 They had a crack inside bringing Patrol more up to date in terms of infotainment, safety and connectivity.

There’s a multi touch pad controller in the middle of the dash on an eight inch screen. The dash itself is a multi-layered design with swathes of faux woodgrain and clusters of switches to control Patrol’s functions.

It looks good in an olde worlde way and is effective in that everything falls easily to hand and is easy to find. The infotainment reconnect button every time you restart the engine is a pain in the neck.

Decent audio, plenty of power outlets, an off road front view camera and ample advanced driver assist technology gives the driver plenty to think about on and off the road.

It’s a constant all-wheel drive with Auto, Low and High range 4WD selectable from a dial on the centre console.

The rear diff’ is an effective helical locking unit for additional grip.

An unusual suspension is used that features hydraulic cylinders for springing and damping instead of coils and conventional shockies.

The hydraulic suspension also handles stabiliser control to keep Patrol on a relatively even keel when cornering. It’s supple and insulates passengers from anything the vehicle is being driven over.

A touch too soft perhaps but super comfy.

Power comes from a 5.6-litre, petrol V8 engine with 298kW and 560Nm output. It’s a sweet revving unit that gives the big Patrol an almost indecent amount of performance. I drove Patrol straight after the Lexus LX570 and the similarity between the two is striking.

The Nissan Patrol drives all wheels through a slick shifting seven speed auto that helps achieve a claimed 14.4-litres/100km. I saw a best of 15.2.

There’s 140 litres in the tank which gives a reasonable touring range. Tow something and watch fuel consumption nearly double.

Built on a ladder chassis, Patrol is a dab hand off road where it’s virtually unstoppable. I took it to into what I thought was some fairly rough stuff and it rolled through with consummate ease.

Pretty darn good is all I can say.

You are conscious of Patrol’s size, weight, soft suspension and light steering on the road but drive it accordingly and you’ll enjoy the comfort and impressive engine performance.

Couple that with the vehicle’s sheer weight and size and you have a human protection capsule right there.

It is not yet rated by ANCAP but may perform well given the standard safety kit.

One other intangible safety feature is the Patrol’s street presence. Other drivers rarely miss you and don’t pull out in front at an intersection.

Try that in your Mitsubishi Mirage. 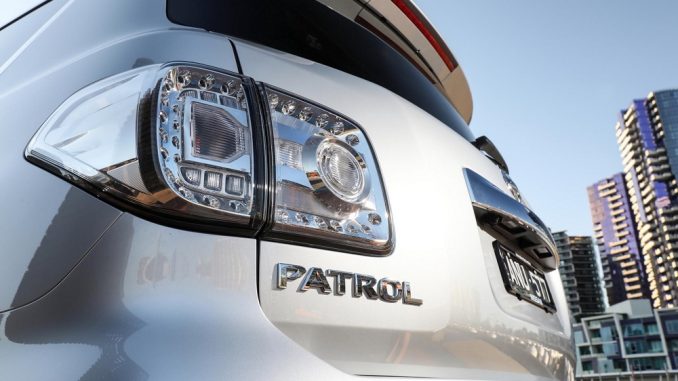 People have been bagging the Y62 Patrol since it came out but the big bugger is a handy tool off road – better than most.

That supple ride translates into a mushy on road feel but once you get used to it there isn’t a problem. You simply don’t feel any bumps… at all.

It’s a tad butch looking but is nowhere near as confronting at that hideous thing from Infiniti that’s the same as Patrol under the skin.

I personally couldn’t buy a Y62 Patrol because of the excessive fuel use.

But if it’s a company car, a user/chooser, a lease job, a salary sacrifice with the boss chipping in for fuel…. wonderful, just like a Range Rover only half the price.

Nissan has taken the fight up to the Ford Mustang in the affordable sports car stakes with this NISMO-tweaked version of the 370Z. The Nissan 370Z is no spring chicken, so are the tweaks enough […]