The Nissan 370Z has been around for 9 years, but it still looks good. Even so, in car terms, 9 years is an ion.

The look carries the design ethos from the preceding 350Z, and is muscular and angry. The shape of the 2-door, 2-seater belies the engineering lurking beneath the skin.

Don’t mistake old for inferior though, that would be a big mistake.

Putting that into perspective, the biggest seller, Ford’s Mustang, sold 440 for the same period.

It explains why Nissan persists with the sexy, low volume, Z car range.

The profile is little changed from the early days of the 350Z, and with a tight coupé style body, sitting low to the ground.

A short overhang front and back keeps the weight distribution at 53% front and 47% rear, an important requirement for handling in corners.

Head and tail lights wrap around, with LED at the back, and LED DTRLs at the front. As good as they look, cutting edge LED headlights would freshen up the front no end.

The driveshaft is all carbon fibre, but unless you crawl underneath, remains out of sight.

The Nismo touches to the exterior are confined to some small details like the H-pattern exhaust system, and the mini spoiler on the hatch lid.

The front fascia has been tweaked, but if it wasn’t for the badge, the Nismo would be easily mistaken for any other 370Z.

Although the Nissan 370Z Nismo sits slightly lower than the standard car, the difference is imperceptible.

The pearl white duco glistens alluringly, and you find yourself falling just a little bit in love, almost to spite yourself.

Smart start and entry are among few of the considerations given to modern motoring. 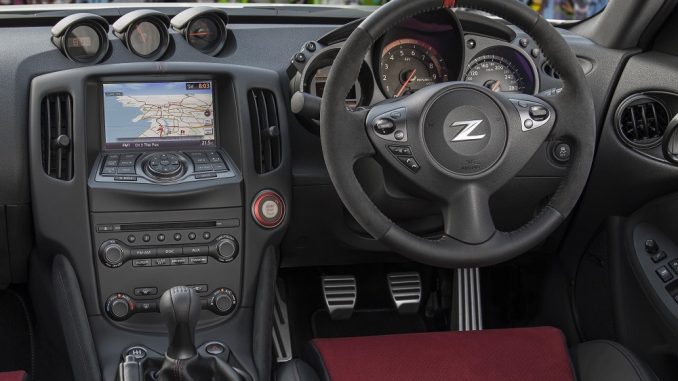 The standard of the cabin looks a bit last decade when compared to cutting edge models like an Audi TT.

The dash is a bit grim.

Had the entire dashboard been covered in a soft covering, the cabin would be transformed.

The driver’s display uses old fashioned dials, and even older fashioned bright orange LEDs from game consoles of the 90’s.

They could have given it some spit and polish with a single LCD display, but the aging architecture probably wouldn’t allow such mod cons.

There are no driver aids apart from the ABS and stability controls. There is no lane departure alert, active or otherwise. Nor is there blind spot monitoring, auto parking or AEB.

Looking behind the seats, there is a spot for a small bag, but it is a bit of a kerfuffle, especially if your back is acting up.

There is rigid stabilser bar that extends across between the suspension towers, so you can’t use the limited space inside the hatched cargo hold.

The Alcantara/leather seats hold any driver firm, regardless of the enthusiasm with which the steering is flung about.

The boot will hold a couple of overnight bags and is generous by small sports car standards. It’s better if you pack light, and use flexible totes rather than hard-cased bags.

While on the subject of seats, the Nismo racing seats are sans heating. That feature is lost in the top model because of the seat design.

It is too shallow, so you bang into the cup when changing gears, and you run the risk of spilling your hot drink all over the gear stick.

There are no other bins or trays apart from the centre console lock box, and a couple of small bottle holders in the doors, but only the tiniest of vessels will fit.

There isn’t even a spot for your phone. So, you put your mobile in front of the gear lever and hope for the best. It is then that you might press the sports button by accident.

On the centre console, you’ll find the climate controls and radio buttons which feel a bit last decade. There is a single zone auto setting for the air conditioning, but all that plastic feels a bit low rent.

The standard sat-nav uses a touch screen and a huge rotary dial which is surprisingly easy to use. There is no Apple CarPlay or Android Auto.

So, you’re probably thinking this scene is a bit grim, but then you press the starter button.

The drive panders to those base instincts, but a 6-pot cannot match the visceral animal magnetism of a V8. Despite that, 370Z remains one of only 2 Nissan passenger cars left standing.

It is the slightly less mental cousin of the ludicrously-certifiable GTR.

The gear gates have a slightly offset pattern, as if someone pushed the double-H from one corner. Once you get used to it, it is as sweet as a nut.

The clutch is similarly delightful. It is precise, and is somewhere between easy and semi-firm. The engine blips to rev match in sports mode.

It has a nice linear take-up allowing a driver to change gears as easily as in mum’s dinky city-runner.

The V6 feels lusty without being suicidal.

As you do, the sound is impressive, but it is just as happy to lope lazily around town.

The little Nissan was comfortable but firm on the highway, but the tyres were extremely noisy on anything but the smoothest of smooth tarmac, and I couldn’t have cared less.

Keeping the movements smooth while dropping a cog or two wrings out the very best of the Z.

As you downshift, the system rev-matches so that gear changes feel more akin to a DSG. It really is a magnificent piece of work.

The 2018 Nissan 370Z range doesn’t have an ANCAP safety rating, while the car is short of many of the modern safety features we’ve come to expect like AEB.

What it does have though are driver and passenger airbags, as well as head and side airbags for the front-row occupants and traction control and stability control.

No So Good Bits 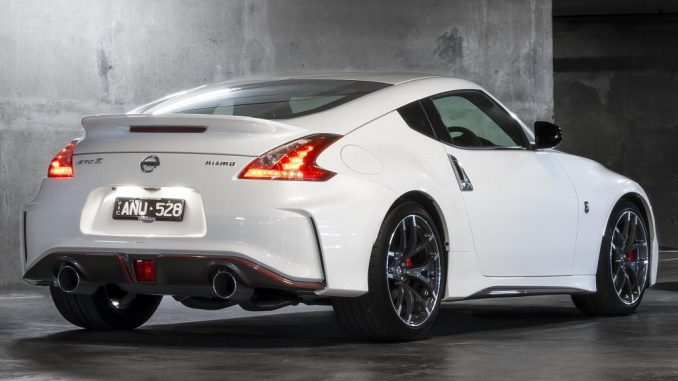 The Nissan 370Z still cuts a dashing look as it sits in traffic, because the design remains unique, especially as the world transitions to the dull and ubiquitous SUV.

A 2-seater coupé is still as alluring as it was in the halcyon days of motoring when you had to wear goggles and scarves to protect yourself from the elements.

It harkens to a time when the only safety gear was a dinner suit. You feel like you’ve stepped back in time, especially once you’re inside.

There aren’t many cars like the Nissan 370Z – a two-door, two-seater, rear-wheel drive coupe with a V6 engine. Not much has changed with the 370Z, just a few inconsequential inclusions to the package this […]

Nissan X-TRAIL Road Test, Review The Nissan X-TRAIL is one of the most popular family SUVs on the market in Australia. Boasting up to seven seats, three engine choices, 2WD and AWD offerings, and reasonable […]

There’s a stack of competition in the seven-seat SUV market, but make sure you don’t miss test driving the Nissan Pathfinder. The recently updated Pathfinder holds up well against rivals like the Mazda CX-9, Toyota […]