Mazda6 has been around for a few years now and has just undergone a mid-life revamp.

This rejig brings in a new 2.5-litre turbo petrol engine out of CX-9 a revised 2.2-litre twin turbo diesel with a more efficient VGT (Variable Geometry Turbo) system and a 2.5 litre naturally aspirated petrol four now with cylinder deactivation to save fuel.

The looks have changed and there’s more technology and higher comfort levels across a sedan and wagon, four grade, 14 variant range with a choice of three engines and six speed auto only with front wheel drive.

Unfortunately the mid-size 6 is in a segment on the ropes as buyers desert passenger cars for utes and SUVs, but if you are in the market for one of the best, affordable, mainstream passenger cars or wagons look no further.

It’s the same coke bottle shape in Mazda’s so-called ‘Koda’ style with a lovely side view accentuated by the low arcing roofline.

The silhouette is sleek and there are new bumpers front and rear.

New colours too along with revised alloy wheels and some extra brightwork garnishes to pick out the handsome lines of the car.

The rear end has a Jag(ish) look while the new grille is a bit Bentley. Very appealing.

Mazda made a big effort updating the interior of new 6 starting with better seats and refined instruments and controls.

The door trims are more stylish and functional while the top of the range Atenza model scores all the goodies including Nappa leather and some genuine wood trim fascia.

The dash has lateral lines that link into the front door trims in a wrap around effect.

The actual read-out meters are the same as before with colour changes.

Some models have heated and vented front seats and there’s a splash more brightwork inside the cabin.

Interior noise levels are down due to the use of thicker metal in parts of the chassis along with additional sound deadening material to the floor and roof panels. 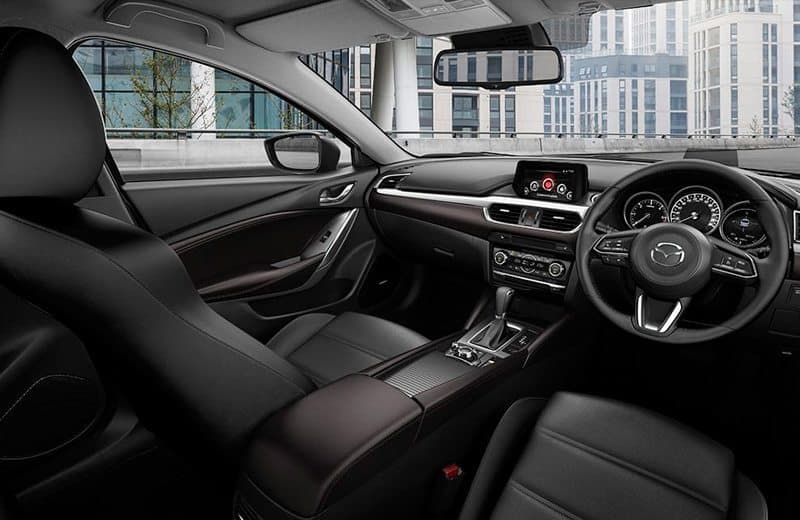 Mazda put more kit into this 6 including a swah of so-called i-Activsense advanced driver assist technology but also plenty of feel good stuff from the base model Sport up;

Huge improvements here with all variants from the base model up scoring Mazda’s full suite of advanced driver assist safety kit called iActivSense.

The two petrol fours have direct injection and with the naturally aspirated unit featuring cylinder deactivation.

The 2.5 turbo has a fast spooling turbo system with a variable inlet aperture and 4-3-1 exhaust headers to overcome potential turbo lag at low engine speeds.

The 2.2-litre turbo diesel has a new twin turbo set-up featuring a VGT larger turbo that helps it achieve an impressive 140kW and 450Nm using only 5.3-litres/100km on the combined cycle.

They even put some effort into making the diesel sound better.

All variants of the new 6 have a six speed auto transmission with paddle shift.

On the road, we preferred the diesel as it offers similar roll on performance as the petrol turbo but uses nearly half as much fuel in real world driving.

And you can hardly hear it except under full acceleration.

They tweaked the car’s dynamics too including ride control with bigger shock absorbers, steering and braking improvements.

The centre of gravity is lower for more planted cornering and quicker steering response.

Performance across all three engine variants is strong with the turbo petrol a clear leader. Lose the snobbish attitude and shop this car against mid-size prestige European cars and you’ll get a big shock on a number of fronts not the least being quality, performance, dynamics and styling let alone value.

The Mazda6 is arguably the best offering in its class that has now become even better with the latest upgrade.

I would have one in a blink, a GT diesel wagon.

Pity few people even look at mid-size sedans these days, they’re missing out.

2017 Mazda CX-5 Road Test and Review… I thought Mazda would struggle to improve their top-selling CX-5 when the 2017 model was brought to market. The outgoing car had successfully captured the hearts of buyers […]

Mazda could finally see a return on rotary engine development. The technology dates back to World War One air-planes, but the rotary engine has long been associated with Japanese car manufacturer – Mazda. In the […]

The countdown is on to the Australian arrival of the new-generation Mazda CX-5 and Mazda Australia has just given us word of boosted safety tech in the new offering. For the first time the Mazda […]