Launched this week, the Lexus offering joins a fairly short list of seven-seat SUVs on offer from the premium manufacturers, discounting off course the larger offerings such as the LandCruiser-based Lexus LX, BMW X5, Land Rover/Range Rover etc.

The Lexus RX, which has accounted for around a quarter of all Lexus sales in Australia over the years, sits in the mid-size SUV category.

The Lexus RX has been a vehicle that has divided opinion over the years and the current model is no different.

The massive spindle grille and the sharp edges serve to either win friends or create enemies…and the now stretched version is likely to only turn those who aren’t a fan even further off.

To create the space needed for the third-row seats Lexus has had to stretch the rear overhang (i.e. the bit from the rear wheels to the bumper) by 110mm, the Lexus RX L also gets a longer roof and tailgate too.

Overall, the new Lexus offering is a hefty five-metres in length from bumper to bumper and when you’re used to the five-door version the seven-seat offering doesn’t look quite as well proportioned in my opinion. 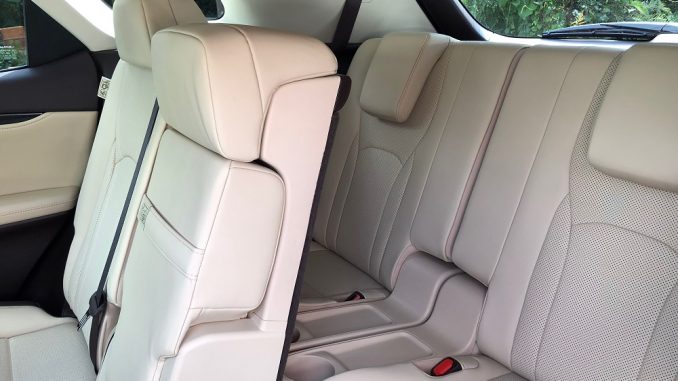 Before we focus on the third-row seats a quick refresher on the Lexus RX in general.

The interior, like most Lexus products, is the cars strong point with excellent fit and finish throughout. How good? I don’t think I’ve ever heard a rattle or creak inside one of the brand’s vehicles.

Some of the highlights include the really comfortable heated/electric front seats, the very good visibility from the driver’s seat and the clear and easy to read head-up display.

Oh, and extra points for giving drivers easy head-up display adjustment controls – some manufacturers hide these in the infotainment system and I’m not a fan of that, not so in this Lexus offering.

Points too for the standard fitment of inductive smartphone charging – a really great feature.

The centre console bin is well-sized and the door pockets would be among the most generously sized in the industry in 2018.

Though there are some areas that aren’t quite so satisfying, firstly the almost universally unloved mouse-type controls for the infotainment system (particularly awkward to use if you’re right handed).

Secondly, the glove box is particularly small and if the passenger seat is slightly forward (as it might be with all three rows of seats in use) it falls onto your legs.

Lastly, Lexus could lift comfort up by providing a little more padding on the edges of the centre console – resting your leg here (as either driver or passenger) becomes uncomfortable in fairly quick time.

The new Lexus offering is available in two specification levels – Luxury and Sports Luxury (there is no F Sport variant) and both are well stocked with standard kit.

While the top-spec version of the Lexus RX L adds:

Oh, and both variants come with a CD player…a sight that is starting to become a bit of a novelty in 2018. 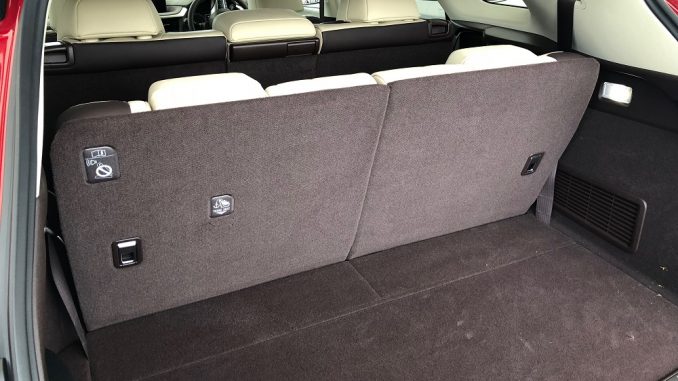 The stretched version thus misses out on the 2.0 litre turbo-petrol engine available in the standard five-seater version.

I had a drive of the 3.5 litre V6/hybrid version on the Australian launch and felt it was adequate for the application.

Mated to a CVT, the engine/electric motor appear willing, however the transmission seems like an impediment to this.

For example, you put your foot down and the engine is revving and working, but that effort isn’t translating to extra go.

For the record, the hybrid gives you a total output of 193kW/335Nm and uses 0.3L/100km extra fuel over the lighter five-door model.

Interestingly, the V6 version loses 5kW/12Nm over the five-seater as the extended rear overhang doesn’t allow for a twin-exhaust.

You also get a ‘proper’ eight-speed auto transmission.

Despite riding on large 20″ alloys I thought the RX L felt comfortable and well-planted on the road.

The tyres though can be a little noisy on some road surfaces, this is even more noticeable due to the very quiet Lexus cabin.

My final drive observation with this vehicle was that it felt quite heavy through the body and roof, solid, but just not as nimble and satisfying as I remember the five-seat RX being.

The standard five-seat Lexus RX has a full five-star ANCAP safety rating, however there is no rating at this stage for the new offering.

Lexus though has done the leg work and ensured safety isn’t compromised for third-row occupants in the new offering with side airbags extending all the way down to the rear of the RX L cabin.

Pedestrian protection has also been added to all Lexus RX variants as standard. All this talk about the new Lexus offering and we haven’t covered the most important aspect – the third-row seats!

Well, to be honest I struggled to access the new seats and when I did my legs were right up against the middle-row seats (with middle-row seats set in such a way to allow adults to sit there).

These seats really are only for children, or, at a pinch, adults for very, very short trips.

There is also another issue that a lot of people might miss unless they actually get into the third-row – there really isn’t a side window for you to look out of…so not great for people with claustrophobia!

On a brighter note, the new offering does boast simple push-button electric folding for the third-row and this means that when they aren’t needed you can easily have a better than decent-sized cargo area.

When the third-row seats are up there’s actually better than expected cargo space too (as seen above).

In short, this is a vehicle for families and car buyers that very occasionally have the need to transport more than five people.

Lexus RX to stretch to three-rows

The hunger for seven-seat SUVs continues in Australia, the U.S., and other markets and Lexus has responded by shoehorning a third-row seat into the Lexus RX. Traditionally a five-seat offering (as seen below), Lexus confirmed […]

2016 Lexus GS F Review and Road Test. Lexus has a genuine sports sedan in its ranks in 2016 with the arrival of the new Lexus GS F. As we know, when the first Lexus […]

Latest reliability study keeps Lexus and Toyota on top. In what is sure to not come as a surprise to anyone, Japanese brand Toyota and its sport/luxury brand, Lexus, have topped the 2015 Consumer Reports […]