Land Rover’s 5th gen country-hopper is the most luxurious, yet capable model. The squared-off boxy body is gone, replaced by a pleasing, streamlined design. It won’t be for everyone. Some would prefer Land Rover stayed in the 80’s!

You might view Land Rover as the entry level Range Rover, but you’d be dead wrong if you thought that meant compromise.

The interior is also pure Range Rover. Features, electronics, and trim, are common across the Jaguar-Land Rover (JLR) brands, and that’s a plus.

The gently sloping roof and angled waistline have a touch of Evoque. The optional ($3,480) glass roof makes the C pillar look like a retro roll-bar. It looks great. 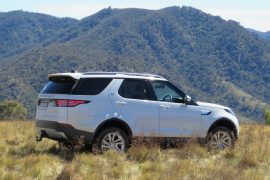 The full length roof rails are a $920 option. The Yulong white metallic paint is a $2010 option.

The Land Rover Discovery HSE has adjustable air suspension with an off-road, and squat mode. It gives extra height when you need it but lowers to get passengers easy access. It is a long way down otherwise.

The lighting is LED. Attractive DTRLs have a distinctive line to distinguish it from the big sisterRangie. A double line across the rear makes the extra-large tail lights look like a show you’ve paid to go and see.

The single tailgate lifts electrically to reveal an inner tailgate.

There are buttons on the left inner wall of the cargo hold which lower the inner gate. Optional buttons lower the 2nd and 3rd row seats of the 7-seater.

Should they get tangled or sense an obstruction, the direction reverses. Headrests fold by button too. The carpeted rear floor is flat with fully useable space. There are buttons inside the 2nd row doors, with further controls from the infotainment system.

The 2nd row seats recline electrically which adds $1,940 to the price.

JRL says the smart phone app can control car functions too, including seats.

Interior space is beautifully designed. It is spacious yet cosy. Some claim it is not as roomy as the previous model. Figures don’t back up that claim. 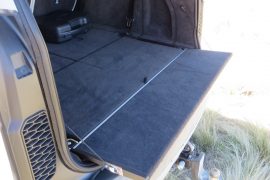 Quality leather and woodgrain is used throughout. There is Range Rover style aluminium trim on the centre console which,although classy, would easily scratch.

There are plenty of grab handles too.

Stowage bins abound. The centre console has been deep enough to swall

ow your arm. It is cooled by the AC flow, so will keep drinks at a refreshing temperature.

The centre stack has a nifty hidey hole behind the AC dials. The dials swing open to reveal a place for sunglasses

and mobiles. The AC controls switch thoughtfully to the main LCD screen while the flap is open.

The controls are all familiar to anyone who has been in a Range Rover recently. Steering wheel buttons, infotainment, and centre console buttons and controls are common too. Sadly, smart cruise control is an option. Most of the really good stuff is.

One thing that isn’t, is the 10” touch screen, which is standard on the HSE, as is the 380w Meridian sound system. I’m impressed by the sound quality, and the ease of use of the system.

The glitchy infotainment software seems to have been sorted, and the system responds fast to input. Previous systems froze, often leaving every menu on the screen simultaneously.

Sat-nav is fairly easy to use, but Apple Carplay would be even better.

DAB should be standard on all audio systems. It’s brilliant. The clear sound and digital tuning make DAB a must have.

Initially, you feel the bulk of what is quite a large vehicle. The responsive engine and smooth 8 speed auto make low down traffic speeds easy. Once you get used to the size, you can really throw Discovery around like a toy. 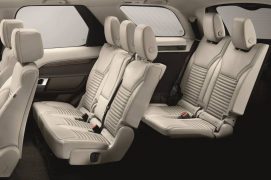 Crystal clear cameras provide switchable views, including a 360° overhead aspect. You’re able to get quite close to objects without hitting them in ways not previously thought possible. Lots of brands have it, but the screen resolution often makes viewing difficult.

Blind spot and lane monitoring make life a bit easier. The steering wheel gets a shake if you wander across lines without indicating. Lights flash if the system sees a car hiding in your blind spot.

It was the highway where Discovery felt most at home. A round trip to Wombeyan caves via the Bowral road highlighted the comfort with which poor dirt roads are tackled.

Although capable of much more, this is how Discos will most likely be used.

The narrow dirt road clings precariously to the side of a gorge, terminating at a camp ground. Deep ruts and potholes were ironed out well. Only the odd clunker gave any rise for concern.

Importantly, the handling was completely unaffected. There were no rattles apart from my teeth.

There are off-road programmes, and automatic 4WD to sort out the driving conditions. If you want a bit of entertainment, watch the system switch between 2 and 4WD, as it locks and unlocks diffs and hubs.

We still use those terms even though most of the clever stuff happens via the ABS.

Power and braking keep the rubber from slipping, while the driver concentrates on direction and speed. 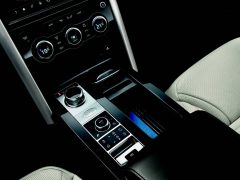 SUV travel has morphed into suburban transport. Although Discovery is incredibly capable, and can tow 3,500kg, it probably won’t be called upon to do so.

Sway control keeps trailers neat and tidy, and height control gives access to a lifestyle hatch drivers can only dream of.

The inner hatch is a great place to perch while eating lunch at the races.

New standard features are being added, though many remain options.

Discovery is a great all-rounder.

The manufacture standard is high, and reliability has improved greatly over recent years. JLR’s parent company, Indian giant TATA, has allowed Land Rover to explore and invest. Quality control points along the build path have been improved too.

Range Rover, Range Rover Sport and Discovery Sport affected… A recall of some current series Land Rover models has been initiated after a possibly dangerous issue with the seatbelt pre-tensioners was identified. The recall is […]

The hottest of the big Range Rovers, the SV Autobiography Dynamic has a hatchback, 22” wheels, and a supercharged 405kW/680Nm V8. Does that make it the hottest of the hot hatches? Jaguar Land Rover Special […]