Has there even been a car that has been more hyped than the Kia Stinger?

Probably not, luckily the big Kia sedan/hatch mostly lives up to that hype and is likely to be a big success for Kia Australia.

There aren’t many vehicles left in the large passenger car segment, the Holden Commodore is now a mid-size car and the Ford Falcon is gone completely.

That means for anyone looking for a large performance sedan that the Kia is about the only show in town.

The Kia Stinger is a fine looking car that gets lots of attention on the roads.

I really like the way the taillights wrap around into the 3/4 panels, the sweeping headlight design, bonnet and front guard vents/highlights and the black chrome mirror covers.

Perhaps the only complaint/observation would be that the Stinger is not completely dissimilar to the smaller sibling, the Optima. How far the South Korean car manufacturers have come in recent years is seen in the interior styling and feel evident in their vehicles in 2018.

The Stinger is no different, it’s a nice place to sit and a nice car to travel in.

Some of the best bits include the seats, the steering wheel, the layout of the controls and switches and the general feel of quality.

Storage areas though are only reasonably sized, while the overall interior space, particularly in width and headroom, is short on what you would find in a recent series Commodore.

The sweeping roof is likely to impact taller people, especially those asked to sit in the rear.

Four people could travel comfortably in the Stinger – a fifth person in the middle seat would feel a bit cramped, and of course there is a tunnel running down the middle of the Kia for the rear-wheel drive and this makes that seat even less enticing.

From the drivers seat you need to be cautious about people and cars hiding behind the chunky A pillars, while rear 3/4 visibility is certainly not the Kia’s strong suit.

The swoopy back (it’s a lift-back) could also do with a rear wiper as water doesn’t seem to run off the rear screen as quickly as it would on a more traditional sedan rear screen.

Inductive phone charging and head-up display are nice additions, though the spoken safety alerts i.e. “School Zone Ahead” are annoying, despite their usefulness (I can’t seem to work out how to turn them off).

The Kia Stinger GT is the top of the range model and comes with: 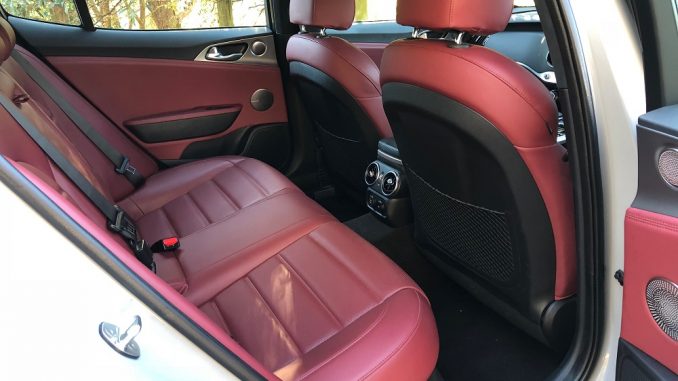 That power and torque is delivered to the rear wheels via an eight-speed auto transmission and a Limited Slip Diff.

Fitted with launch control, a heavy right foot will get you moving at 100km/h in a quick 4.9 seconds.

There is no want for extra go, or extra power, but I did feel a bit let down by the exhaust note, it’s just not really angry enough or loud enough for my liking.

The Kia Stinger is a large and relatively heavy vehicle and that means you can’t expect hot hatch type diving dynamics.

It does however do better in the bends than perhaps you might expect, be careful though about stomping on the accelerator mid-corner…the tail-end will give the traction control a fair job to do.

There are different drive modes that you can select, this means it doesn’t always have to be set up as a sports car, though the low profile tyres provide a fairly harsh feel on cracks and potholes in the road regardless.

The Kia Stinger range is covered by a full five-star ANCAP safety rating. Kia is the rising force in the Australian car market and having a vehicle like the Stinger available makes the brand not just a cheap and cheerful proposition, but a brand with vehicles that people will actually strive for.

How things have changed for this brand!

The Kia Stinger is sure to delight people coming out of Commodore and Falcon, especially the twin-turbo GT version, and is sure to build a big following in our market in coming years.

New Kia models shown off along with a rather exciting concept car. The Frankfurt Motor Show is renowned for exciting new model releases and Kia is keen to be noticed in 2013. Four new Kia […]

Hybrid Utility Vehicle teased by Kia as part of green car push. Kia has today vowed to be a worldwide leader in environmentally-friendly cars (as we have covered here) and the South Korean brand used […]