Get your epi-pen ready – the most anticipated Kia ever is here and it could cause an anaphylactic shock. Ladies and Gentlemen, meet the Stinger.

Supposedly it’s the car that will fill the shoes of the soon to be extinct Aussie Holden Commodore.

Is it up to the task? Our first drive at the Australian launch would suggest yes, yes it can.

While 99.9% of would-be Kia Stinger owners would never take the car anywhere near a racetrack, that is exactly the place to take a car to see how competent it really is. 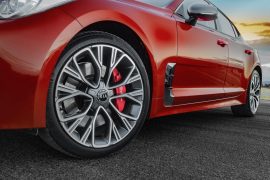 It’s an opportunity to push it to its limits and expose weaknesses in its handling and drivetrain.

The Stinger passed the test with flying colours.

Kia flew the Aussie media contingent to the nation’s capital and booked out Wakefield Park Raceway for the day.

Along with their seven-year warranty, taking a car like this to a race track is an example of the confidence the Korean’s have in this car. And it’s warranted.

At the launch, the entire media flock all had the same opinion – this is a bloody good machine.

Then there was Australian Rally Champion, Cody Crocker, an expert at left foot braking, who also sang the praises of this big, rear wheel drive tourer.

Even Cody (who was able to throw the Stinger around the track at speed that was almost incomprehensible) felt that the Kia engineers had got it right.

Just have a listen to this week’s Behind the Wheel radio show/podcast and you’ll get what I mean. This is a guy who doesn’t work for Kia and isn’t being paid to say nice things. But he does.

So what is the Kia Stinger?

It comes in four-cylinder and six-cylinder variants. 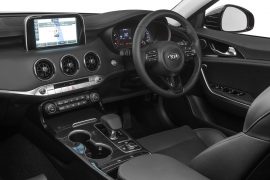 The headline car, the one Kia expects to sell the most of, is the GT V6 twin-turbo that pumps out 272kW and 510Nm of torque.

It can push the big Kia to 100km/h in just 4.9 seconds. A limited slip differential is standard on all V6 twin-turbo models, you can feel the difference, particularly on the track.

All V6 models get four caliper Brembo brakes which are progressive and provide great feel.

It’s fast in top spec guise, but no slouch with the 2.0 litre four cylinder turbo under the bonnet.

It’ll still hitting the magic mark of 100km/h in an impressive 6.0 seconds. It also feels more agile, more throwable into a corner and overall more manageable.

Regardless, with a mere $3000 more to step up to the V6, it’s seems that Kia’s own prediction of 75% of the sales going to the six pot twin-turbo is on the money.

The whole range is blessed with a truly beautiful build quality. The absolute base model which costs from just $45,990 is laden with standard features like digital radio and a 10 year sat-nav map update program.

The interior is a crafted, intricate and feels like it should have a badge originating in Europe on the steering wheel.

It is disappointing that you have to opt for an Si grade or above to get the full suite of active safety systems, like blind spot monitoring, lane keep assist and attention alert.

At least auto emergency braking is standard across the range. 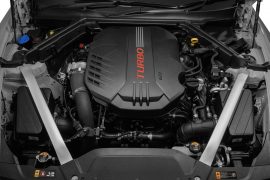 Like Kia managment, I too would expect most sales to head toward the upper spec GT-Line and GT models.

The adaptive suspension comes standard with these models but I’m not convinced I’d want it.

Yes, I’d love the extra features that come with the higher end model – things like thumping Harmon Kardon 19 speaker sound system, with subbies under the seats.

You get a colour head up display, 360 degree camera, heated and cooled front seats, Nappa leather, flat bottom steering wheel, lots of aluminum accents and “Active Sound Design” which accentuates the engine and gear change noises, but it’s the adaptive suspension that I could do without.

It turns what is an unbelievably good performer into a car that seems fidgety and a little nervous.

After steering the V6 Si model around some very challenging roads around Canberra, the car with the standard suspension tune was outstanding.

There’s a brilliant back end on it that gets the power to the ground flawlessly. Equally the front end is supremely composed.

It’s a car that could not be unsettled at high speed through bumpy corners. With minimal body roll and great feedback through the steering wheel it’s easy to drive fast. 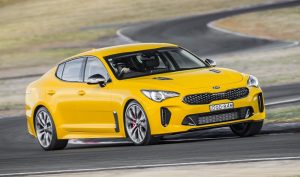 You can drive harder into corners with more confidence.

The cars with the adaptive suspension, while not bad, just couldn’t come close to the competency of the standard car.

In fact, after a drive in the car with the adaptive suspension I’d convinced myself it must be wearing tyres with a much lower profile – as it turns out, the V6 models are all shod with the same 19″ Continental’s with a 40 profile.

There’s only two options – pearlescent metallic paint for $695 and a Sports Exhaust System.

At launch, Kia hadn’t finalised the cost of the exhaust option, and it’s one that is fitted by the dealer, not the factory.

Unless it’s a ridiculous price, it is an option you’ll want. It sounds great but could have produced more noise.

A button to activate it would also have been nice – you need to flick the Stinger into Sport mode to get the baffles to open.

As competent, composed and entertaining as the Stinger is, I’m left with one question. Who is going to buy this car?

I’d assumed the Police forces of the country would be champing at the bit to sign deals. Turns out, on the very day of the launch of the Kia Stinger, BMW announced the sale of at least 80 530d’s to the Victorian Police Force.

A modest sales target of 6000 cars a year is likely to be achieved through sales to folks who love to drive, because it is truly a driver’s car. 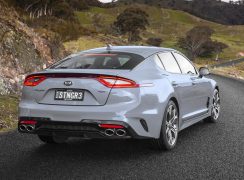 So what to make of the Stinger?

It fills a void vacated by our local manufacturers because, they said, there’s no money in it.

Can Kia, with this global model, inspire the Australian public to once again be enthused by a big, rear wheel drive sedan? Or has the horse bolted and is it already comfortable in SUV paddock? Time will tell.

More importantly for Kia, it’s a car that demonstrates what the brand has become. Confident, clever and at the top of their game. The car has lived up to the hype.

It’s exciting, enthralling and beautifully built, and hopefully it’s an indicator of what is yet to come from Kia.

Kia Australia has been kind enough to lend us a new 2016 Kia Optima GT to road test and review over a full month. Longer than the usual one-week loan arrangement, getting the Kia to […]

Study finds Kia Australia is looking after customers. On the back of a run of car of the year awards for the Kia Sorento, including our own Car of the Year title, Kia has surged […]

Joel Helmes road tests and reviews the mid-spec Kia Sorento. First up, I’ll make this just a short Kia Sorento review as I checked out almost exactly the same car last week, albeit the lower-spec […]