The much-hyped big Kia Stinger has finally shown its full fury in a mad track day near Canberra.

Kia bravely put Australian media behind the wheel at Wakefield Raceway near Goulburn in central NSW.

The course has challenging switchbacks and tempting straight-aways, and is far more punishing than anything regular motoring will ever be.

It performed beyond expectation, remembering this is a road-going GT car.

Yes, that’s right, a GT car from Korea. Don’t be surprised if you see a few more surprises in the coming years.

Stinger squirmed pleasingly under extreme braking, but steered exactly where it was meant to go. It begged for mercy, and was shown none of it. It was thrown one way, then the other, with tyres specially selected for track work. 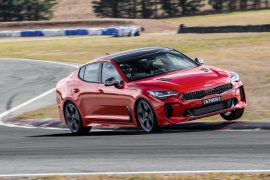 With traction control is left on, only the most ill-advised maneuvers looked like unseating the rear-wheel-drive flagship.

The only time dust flew, was with traction turned off.

There are 4 grades, 2 engines, and 1 transmission. Two different suspension types make for a feast of choice.

They are both teamed to an in-house-developed 8 speed automatic transmission. An electronically variable suspension system is available on some models.

Tell me this doesn’t look the business.

A canny viewer will notice the top models having a distinctive DTRL with an Audi-esque look to it. A double angle-line divides a headlight array, and looks far more expensive than any previous Kia buyers would be used to.

The 4 door-plus-hatch makes the Stinger a grand tourer in the 70s style.

The silhouette has a GT coupe look to it, but it does mean a low rear door.

You can’t help but notice a quality that seems spookily redolent of Audi and BMW.

I’m not saying a badge-buyer is going to go for it, but a sensible person certainly might.

Distinctive “Eye of ISIS” rear lights, have a streak along the rear side panel. A pert rump has a muscular look when seen from behind. I see Aston Martin every time I am behind it!

I particularly like the integrated exhausts which look expensive and high-end. 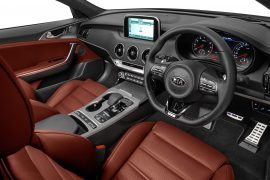 A choice of wheels tops off an exterior that has been blinged to within an inch of its life.

What a treat the cabin is.

A floating tablet with touch LCD input sits atop a central stack integrated in the style of a cockpit. 3 huge circular vents, and easy to use AC controls hover over a soft-close cubby hole.

The seating is gorgeous.

There is no doubt the buttery-soft Nappa leather is real, but I defy you to pick the simulated leather anywhere else in the range.

Red leather is an option box I’d tick for the GT. It screams “wow-factor”.

Electric adjustment on the driver’s seat extends to the passenger on the top model, but all grades get twin AC temperature knobs.

Drilled aluminium covers on the speakers of the GT complete a look any Euro snob would be proud of.

The audio sound is excellent. It is deep and rich, and I felt like I was at home.

There is a feeling of space coupled to a distinct air of OCD high-end care and attention.

Kia claims the Stinger is a true GT, and I agree.

As always, the Korean car maker has crammed its flagship chockers full of gadgets you’d expect to pay much more for.

Carplay/Android Auto is standard on many Kia models, including the Stinger and of course DAB digital radio, and sat-nav is standard.

Launch Control allows takeoffs to be controlled by the system. We tried it, but unless we did something wrong, found it inconsequential.

I cannot fault the driver layout, no matter how hard I try.

A colour HUD (head up display) is handy, but you can’t see it with polarized sunglasses. You get speed, and sat-nav info projected onto the windscreen right in front of the driver.

A very (very) long track session showed the Kia to be incredibly competent in an environment it will never ever be asked to endure under normal operation.

Extreme cornering, braking, steering, and acceleration shows weaknesses in design. Stinger shrugged it all off.

Getting stuck in to the brakes made her squirm, and tugging on the steering wheel brought the nose into a corner in ways a normal driver would never do, but would love to try. 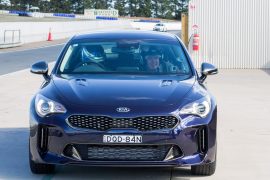 Stinger remained composed, unless pushed beyond what a road-going sedan would normally be asked to deal with. Even then, it did not come unglued, with the traction control left on. Turn it off at your peril. Yes, you Sam.

The exhaust has a beautiful sound even in 4-cylinder form.

Brembo brakes pull Stinger up quick smart under normal conditions, and there is no noticeable fade with extreme use.

On the road, we liked the standard dampers most of all which felt supple and sophisticated.

Road noise was most noticeable on the top model with the lowest profile tyres. Even then, it was kept to a minimum, and wind noise was almost undetectable.

The GT nature means a driver could easily cover a thousand kilometres and feel fresh as a daisy at the other end.

This is everything Kia promised it would be.

There is nothing else to touch Stinger in this segment. There will be no rear wheel drive sedans other than the Kia.

The 4.9 second 0-100 V6 puts the GT in an arena previously occupied by V8 Commodores and Falcons.

There is no manual transmission, and no purely-manual operation of the 8-speed auto.

I’m not pretending that a Kia is a BMW for a minute. But, while 60 grand would by a baby Beemer, you’d be so painfully cramped after 200 kilometres, you’ll have lost the will to live.

For the time being, Kia has made Stinger the one and only choice for a buyer wanting a large car with 4 (or 5) seats, with plenty of pulling power.

It is stylish and classy, with even the base model being able to see off the others in a single stomp of the pedal.

Stinger is a benchmark by which the Japanese, Europeans (and indeed other Koreans) will struggle to reach.

Kia promises next-gen Optima will be better yet. It was our 2011 Car of the Year and now Kia Optima buyers are being promised an even better product when the next-generation model arrives in dealerships. […]

The only area where we could deduct a point or two off the all-new Kia Rio was the models rather limited four-speed automatic transmission. Now, just two weeks after being launched in Australia (full details […]

Kia concept car to be unveiled in Frankfurt described as ‘robust and substantial’. It’s been a little while since we have had a major international car show on the calendar so I think all of […]