There’s a lot to like about the Kia Stinger, but how does the four-cylinder version compare to the V6?

That’s a question that is pretty easy to answer – it really doesn’t.

The two versions of Kia‘s new (and first) large sedan are like chalk and cheese when it comes to the driving experience.

Interestingly, I actually came away from my drive of the 2.0 litre version (the four-cylinder) feeling that another Kia might be a better option.

My test car was finished in the same Ceramic Grey paint as what I had on the V6 Stinger that I reviewed recently.

Kia, to their credit, have given buyers some interesting colour choices for their new Stinger – I like the grey, not sure though that I would buy it myself, looks a bit too much like primer (undercoat) to me!

The red paint, or one of the blues might be what I’d choose.

Whichever way you go you get a car that captures a heap of attention on the road, and the Stinger is a conversation starter too!

Be prepared to have to talk about your car to total strangers.

The best part of the Stinger design, in my opinion, is the shape of the rear 3/4 panels and the wrap around taillights – very sexy. 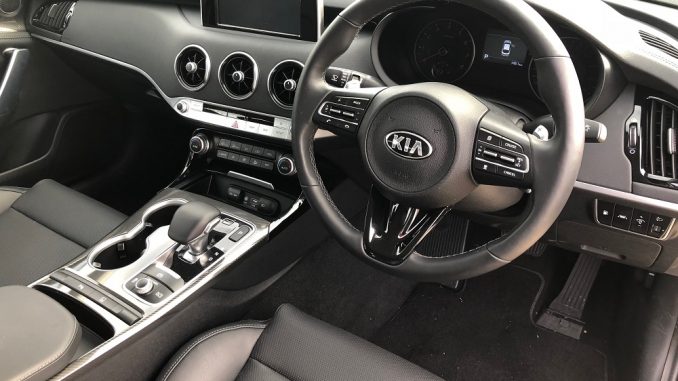 The Kia Stinger offers good/decent front and rear legroom, however the roof is fairly low and the vehicle feels a bit thinner than your traditional Falcon/Commodore.

The hatch rear provides a long and reasonably wide cargo space, though it isn’t particularly deep.

Kia has done a top-shelf job with the fit, feel and finish of the Stinger cabin.

Simple controls that are also well-placed lead the positives, overall there’s not much not to like.

The four-cylinder version of the Kia Stinger is available in three specification levels – 200S, 200Si and GT-Line.

My test car was the Si and it comes with standard gear including:

Unfortunately, like all other versions of the Stinger there’s no rear windscreen wiper – an addition I believe the vehicle needs.

Chances are, if a Kia Stinger is on your shopping list you’re the type of person who likes some grunt and get up and go.

If that really is the main reason that you’re considering a Stinger then I really wouldn’t recommend the 2.0 litre turbocharged version.

Not when there’s the ‘real deal’ V6 available for not a lot of extra dollars.

272kW/510Nm is what the V6 boasts, the four-cylinder, albeit an offering that is a hefty 87kgs lighter than the more powerful version, gets just 182kW/353Nm.

Compare this to the Kia Optima GT, the slighter smaller Kia sedan offering (reviewed here), and you’re looking at a near identical 180kW/350Nm.

But the Optima weighs in about another 80kgs less than the Stinger.

True, the Optima is front-wheel drive, and you get just a six-speed auto instead of the Stinger’s new 8-speed box, still it is an option to keep in mind.

Back to comparing V6 Stinger to 4-cylinder Stinger, while the 2.0 litre car is nowhere near as quick as the six, it does feel more nimble, especially in the front-end and this makes for a perhaps better balanced car.

Still, the V6 is where I would be heading, and if I had the choice I would probably go with the Optima too in comparison to the 4-cylinder Stinger.

Take note however, the base-model Stinger 200S is only rated three-stars. 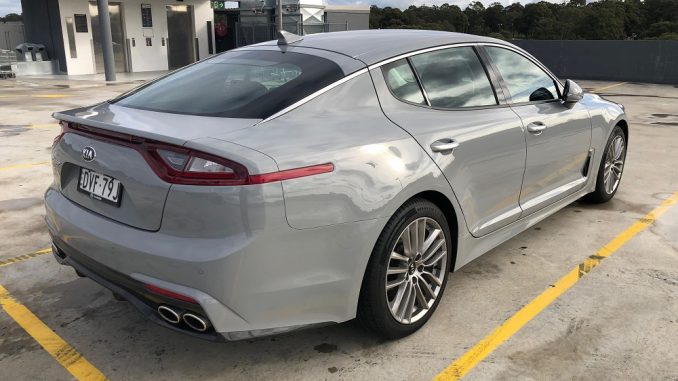 As mentioned, although the Kia Optima isn’t as new as the Stinger I prefer the turbocharged GT version of the slightly smaller Kia over the Stinger.

The interior space is not significantly different between the two and the Optima (a traditional sedan) has a comparatively sized boot.

I’m not sure if the lure of rear-wheel drive would be enough to get me handing over the extra dollars for the heavier and thirstier Stinger.

If your heart is set on a Stinger however, well the V6 is the only way to go and won’t cost you enough of a price premium to make it worth compromising with the four.

A recall that will affect over 600 vehicles has been initiated for the 2017 Kia Carnival people-mover. The recall is being overseen by the Australian Competition and Consumer Commission (ACCC) and involves 2017 YP Carnival […]

2015 Kia Sorento diesel review filed by Garry Fabian. The 2015 Kia Sorento continues to shine and was recently named the Behind the Wheel Car of the Year. I won‘t go against my colleagues, the […]