There’s already a huge amount of love for the Ford Ranger among Aussie ute buyers, now a seriously cool version of the big-selling offering is also on the way.

Ford Australia has just confirmed the Ford Ranger Raptor is coming in 2018.

The car company has put up a teaser video of the keenly-anticipated new variant on their website – check that out here.

Ford tell us the Raptor has been designed and engineered to deliver an adrenaline pumping experience, with a level of capability and off-road performance never before seen in the mid-size pickup truck segment.

There is no word either on whether the Ranger Raptor will retain the traditional 3.2 litre turbo-diesel engine, or will offer an EcoBoost V6 engine (as found in the F-150 Raptor).

“Ford Ranger Raptor will offer Ranger fans a fantastic opportunity to own an authentic off-road performance version of their favorite truck for the first time.” 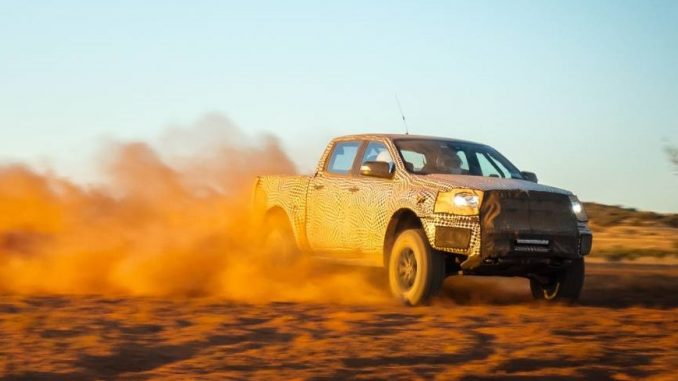 The new Ford Performance offering will take on the recently arrived Toyota HiLux TRD and a possible HSV version of the Colorado.

We will bring you more details on the Ford Ranger Raptor as further info and updates come to hand.

Stay up to date with the latest Ford News at behindthewheel.com.au.

Harrison F-Trucks offers F-Series range from this month. It’s the most popular vehicle on the roads of the United States, now Australian ute and truck buyers have the opportunity to get their hands on a […]

Ford Australia has confirmed the keenly-anticipated new Ford Focus RS is now in Australia, the only problem is all of the initial Australian allotment of the cars are already sold! Much like the demand for […]

Emergency Assist system added to Ford Focus ST Sporty Focus joins Kuga in offering potentially life-saving technology. The performance version of the Ford Focus is the latest model from the blue oval to pick up […]