The Toyota RAV4 proudly boasts having been at the absolute forefront of the small/medium SUV craze.

Today, as just about every other manufacturer is now cashing in on the groundwork laid by a handful of manufacturers, including Toyota, the RAV4 remains a better than good option for prospective buyers.

There’s a noticeable difference though between most of the other small/medium SUVs on the market – the 2017 Toyota RAV4 has a more rugged feel about it.

I think this is especially felt here in the entry-level RAV4 GX.

For example, the Toyota RAV4 GX comes with steel wheels, it has reasonable ground clearance underneath and a reassuringly strong feel in the body/doors.

And the all-wheel drive variants also boast a Hill Descent Control system and this would come in handy when negotiating slippery off-road surfaces.

No, there isn’t low range gearing, or a centre diff lock, however I reckon the AWD RAV4 will take you further off road than most rivals.

Toyota Australia handed me keys to a GX-grade RAV4 with the AWD and the 2.5 litre four-cylinder engine.

Boasting 132kW and 233Nm, I was generally quite impressed by the engines enthusiasm.

I generally kept the RAV4 in Eco mode, though there’s also ‘Normal’ and ‘Sports’ modes, if you want more lively acceleration.

My week of city driving netted me fuel economy of 9.3L/100km, not a bad result for an SUV this size.

On the road the current series Toyota RAV4 is easy enough to drive, and the ride and handling are both around expectations. 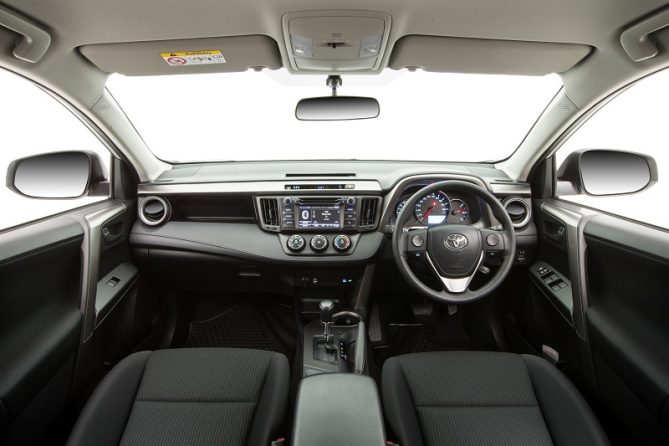 While inside the cabin you get a good array of standard gear, including a reverse camera and the latest-generation of the Toyota infotainment system.

I think this system is a whole lot better than the older system (such as what I found in the Tarago last week), however you might say that some on-screen buttons are still a touch small.

Programming, functions and Bluetooth syncing though was all found to be stress-free.

I also like the simplicity of the GX cabin, everything, including the climate controls, are in exactly the right place and work in a simple and familiar way.

Worth mentioning too is the attractive driver info screen, another new/updated edition to the RAV4, again, this looks good and is quite functional.

The GX-grade misses out on rear air-conditioning/heater vents, though to compensate there is a large vent located on the top of the dashboard and this seems to help distribute air to the rear.

Decent-enough cabin storage areas are also worth a mention and the RAV4 GX comes standard with a cargo net and blind.

As around an average height Australian male I felt that the seat adjustment (height adjustable) and the steering adjustment (tilt and reach) didn’t quite help me get into a perfectly comfortable position.

I felt just a little cramped, even with the seat as far back as possible.

Legroom though, front and back is pretty decent and the boot space impressively large.

Summing it up; the Toyota product is a continually strong seller in Australia and that is for a reason – the RAV4 is a very well executed small/medium SUV.

Definitely a bit more ‘rugged’ than most others, to a small degree this comes at the expense of refinement.

Overall, the RAV4 is well worth checking out, especially if you plan to traverse the odd dirt road.

Paul Maric road tests and reviews the 2014 Toyota Kluger. Since storming on to the scene in the year 2000, Toyota’s big-SUV, the Kluger, has been a raging success. Available in both front-wheel-drive and all-wheel-drive, […]

Toyota adds extra value to new-look Aurion. The Toyota Aurion range has received a significant make-over as the mid-size sedan enters the final stage of its Australian-built life. While prices remain the same, Toyota has […]

October 27, 2017
There is no need to have a car that smells foul, not with our Car Product of the Week anyway – CarPlan Kleen Air. An ingenious air conditioning cleaner and purifier, we’ve tested this product […]