My considerations in choosing a car have changed since becoming a father, and while I have no plans to have my own little footy team, the seven-seat Nissan Pathfinder 4WD is a great family car.

The extra two seats in the back fit in comfortably in the large SUV, unlike the smaller Nissan X-Trail brother we recently reviewed, where the seats really serve in emergency situations only.

Though they are a standard affair, in that they are square and fold flat into the floor, the rear seat backs have a long foldable headrest to provide more support making up for the lack of shoulder height.

Accessing them doesn’t require passengers to be a contortionist as the second row seat bottom fold up and the whole unit slides further forward improving the ease of access.

And, in what is a becoming a factor in my assessment, the Nissan Pathfinder does have ISOFIX ports in the middle row of seats with three tether points and even one in the back row.

The boot is kind of limited with the seats up but enough for some shopping or a couple of bags. Throughout the interior, storage is at a premium with cup holders for last row passengers, cup holders in the rear door handles so you don’t have to reach down to the bottom of the well.

Up front there are also large cup holder in the middle console adjacent to the split level storage box.

Rear occupants can also enjoy air vents in what is a spacious interior.

The cabin may be on the less refined side compared with the higher specification or other competitors and honestly hasn’t changed all that much in the past few years especially in the dash.

The Nissan Pathfinder ST is really built for the occupant – roomy, comfortable and plenty of storage.

Recently receiving an update, the Pathfinder gained refreshed styling with, in my opinion, a very attractive grille and autonomous emergency braking and other safety tech but unfortunately not in the base model ST.

The meaty, but thirsty, 3.5L V6 benefits from more power and torque and the constantly variable transmission (CVT) too has had a refresh. 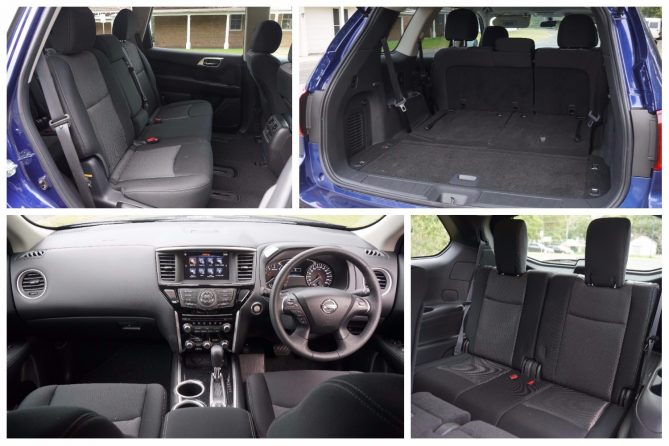 The V6 engine – default across the range – has a lot of enthusiasm, and can get away from you if you’re not careful but as I said, it can chew up fuel registering 11.6L/100km.

Despite the CVT (which isn’t our favourite transmission at Behind the Wheel), I didn’t notice any major hindrance although it did hold the gears for a bit long.

I had no issue moving it around what with good visibility from the large wing mirrors and a rear view camera and sensors to help with the backing up.

The Nissan Pathfinder is the definition of a large seven seat SUV both in looks and in practicality, and while not the flashiest of the bunch, is a satisfying offering.

Nissan confirms production of new Kicks Crossover. Nissan will expand its SUV line-up this year with a new global model known as the Nissan Kicks. Based on the Nissan Kicks concept that was unveiled in […]

Chris Miller road tests and reviews the 2013 Nissan Pulsar ST hatch. The Nissan Pulsar has made a long overdue return to the Australian motoring landscape. The new Pulsar is certainly a big step up […]