Evolution is the word that comes to mind, certainly not revolution, when discussing the all-new Mazda CX-5.

Landing in Australian dealerships now, why would you mess a with a formula that has led to Australian’s falling over themselves to be Mazda CX-5 owners over the past four years?

The Mazda CX-5 is not just the best-selling vehicle in the Mazda Australia line-up, its also been Australia’s most popular SUV for the past four years straight.

So, for Mazda it was a case of improving, not ‘fixing’ the CX-5. 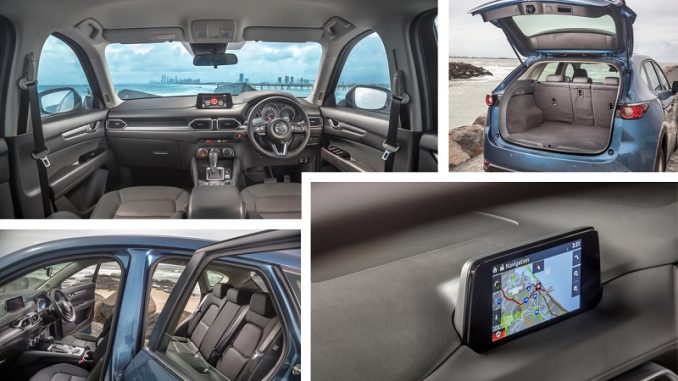 The new model looks sharp and modern and I like the shrunken taillights at the rear in particular.

Proportions are essentially the same, however the engineers/designers were able to expand the cargo space by a handy 39 litres.

Mazda told us that their customers had asked for a quieter Mazda CX-5 and this has been achieved by way of extra insulation and carpet, as well as a thicker windscreen.

Engine choices remain the same as the outgoing model, including:

All three engines were tweaked for improved responsiveness and better fuel economy, though those improvements are fairly minimal.

While a six-speed manual remains available in base-model configuration along with the smaller petrol engine.

From then on up its six-speed auto only.

I got a drive of both the 2.5 litre engine and the diesel and was satisfied with both.

The diesel in particular, although not expected to command more than 15% of sales, seemed to really get along nicely and the 420Nm certainly helps you climb hills.

The 2.5 litre petrol engine, not surprisingly, provides the best acceleration from low speeds and would be the pick for most city drivers (it also sounds pretty nice too when you put your foot down).

I thought the ride and steering were both fine without being any more or less than what you might expect on a mid-size SUV.

A good addition is the Mazda ‘G-Vectoring’ technology and this helps keep the Mazda CX-5 grounded and balanced in the bends, especially on wet roads.

Interestingly, the new Mazda SUV is up to about 40kgs heavier than the model it replaces and that generally goes against the trend of weight reductions in new models.

Another change is a new mid-spec offering – the ‘Touring’, this new variant takes the line-up to five different model grades and sits between the Maxx Sport and GT.

Customer feedback has also encouraged Mazda to introduce a redesigned rear seat and an electric tailgate is now available in GT and Akera grade models.

Models from Touring up also gain a head-up display with speed sign recognition/display that warns you if you’re traveling above the speed limit – a very handy feature.

I am also happy to report that the new model also picks up some extra standard safety gear, including blind spot monitor/warning, rear cross traffic alert and a forward/rear collision alert system.

A disappointment though is the lack of rear air-conditioning vents in the Maxx, these only appear in Maxx Sports and up.

Some other observations around the new Mazda CX-5 include:

And I noticed that I wasn’t entirely comfortable in the driver’s seat after a good period of time and this was due to the rather bulky centre console stealing some knee room (i.e. it is difficult moving your knee/leg over to the left). As always with new car launch reviews, those were my early observations of the new model and I look forward to bringing you more in-depth reviews of this offering in coming months.

However, I come away from my first experience of the new Mazda CX-5 confident that Mazda has made enough changes to keep the model atop of SUV buyer shopping lists for the next couple of years at least.

2013 and 2014 Mazda6 models recalled. An electrical fault that could see the fuel pump stop working has been identified in some models of the Mazda6. The ACCC is overseeing the recall which affects sedan […]

The whole 2017 Mazda MX-5 range now possesses a full five-star ANCAP safety rating with the extension of the rating to include the hardtop Mazda MX-5 RF. Mazda added more safety technology to the sportscar […]