Constant improvement, that’s what always comes to mind when it comes time to review the Kia Rio.

I consider myself a bit of a Kia Rio expert, why? Because there’s been one in the family for six years and because I get to drive the latest iteration every year.

After recently getting along to the Australian launch of this new-gen model, I’ve now had a full week to better get to know the car.

Again, the only real weak spot is the auto transmission. 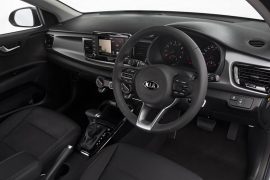 Just a four-speed unit, the transmission lets the engine down by not being quite responsive enough to shift down when more power is needed.

When it does shift down, because there are so few ratios, the step is noticeable and this knocks some refinement off the little Kia.

Why do you notice this so much? Mainly because today we are so used to having auto transmissions with five or more ratios and these often provide a smoother drive.

Still, at least it isn’t a CVT! (that will make more sense if you read this article).

I’m sure the team at Kia Australia would like a better transmission for the Rio, and again the official line is to “watch this space”.

Hopefully the six-speed transmission, available in the Rio in some other markets, will come to Australia soon.

I reckon the transmission is the one thing holding this car back, and why it isn’t selling in greater numbers.

For the record, in June, Kia’s Rio had to settle for fifth-place in the light car sales race with more buyers opting to instead go for the Mazda2, Hyundai Accent, Toyota Yaris and Honda Jazz.

That is such a shame as this is an otherwise excellent little car.

Kia has got the steering, ride and handling just right in the Rio. When compared to our 2011 Rio - well it’s light years ahead!

Great visibility, nice interior, tilt and reach steering adjust, nicely-sized boot and good headroom/legroom are some of the other highlights.

If safety is a big consideration, and why wouldn’t it be? The 2017 Kia Rio hasn’t yet been ANCAP tested. 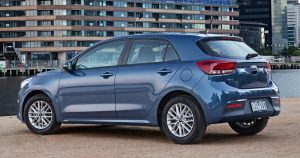 However, it does come with a good array of standard safety gear, including a reverse camera and rear parking sensors.

Disappointingly there is no autonomous emergency braking (AEB), either as an option or even on the top-grade model.

For the record, the Mazda comes standard with the tech across the range.

The Kia does however pick up that industry leading seven-year warranty.

Summing it up; the new Kia Rio is as good as, or even better, than most of its rivals.

Pricing is spot on, the features list is better than generous, and the car is an easy one to drive and live with.

The auto transmission is an issue though and it would be nice to have the option of AEB.

2017 Kia Rio S Review 2017 Kia Rio S Road Test and Review... The Kia Rio has made a real impact on the Australian light car market since it debuted back around the turn of...
2012 Kia Rio Review 2012 Kia Rio Road Test and Review... The Kia Rio is one of the best selling cars on the planet. Aside from being popular with buyers the Kia Rio has ...
2017 Kia Rio Launch Review The all-new Kia Rio is here and I'm really pleased to say that the Korean car company has another pleasing and well-rounded model to offer Australian ...
2017 Kia Optima GT Road Test The 2017 Kia Optima GT is probably the best-value car on the market. Why? Because it delivers a much better than expected drive, great cabin space, go...
2017 Kia Picanto Auto Review 2017 Kia Picanto Auto Road Test, Review The Kia Picanto is a leader of the micro car class. Albeit, a very small segment, the Picanto sets the sta...
About Joel Helmes 3725 Articles
Joel is the founder and CEO of Behind the Wheel. Joel has a background as a radio broadcaster with on-air roles at 4BC, 4KQ, 2KY, 2LT and 2UE amongst others, as well as a news editor and program director. Joel’s relationship with cars stems back to his early childhood learning to change oil and brakes with his father and uncle. This continued on into his driving years owning an assorted collection of cars.

Polestar set to launch this week

Truck fleets encouraged to give millennials a go

Teens not getting the road safety message

The Behind the Wheel Car Podcast is bigger than Ben-Hur this week! Livinia Nixon has just launched a new book, Henry’s Pirate Adventure - she joins the boys with all the details. Livinia also chats […]