Infiniti sales, while growing, don’t seem to reflect the quality and standard on offer.

Their luxury vehicles are much of an unknown quantity for most buyers who have the habit of sticking to the brands they know best like Lexus and German marques.

But I’m always for being different, so with good construction, fit and finish, the Infiniti is a fantastic unique option.

Personally, I haven’t had much exposure to Infiniti either, so a week in the Infiniti Q60 GT sports coupé was a revelation.

You get the attractive curves on the body design now associated with Infiniti cars, which extends to the interior with sweeping lines on the dashboard and modernistic curled door handles. The 2.0 litre turbo engine seems larger than it is and while not a powerhouse, gets the Q60 up to speed quickly.

However, it does this gracefully and not so noticeably as the cabin is quiet and peaceful.

You even get a gruff engine note at higher revs augmenting its brawn as you make your way up the seven speed automatic gearbox.

The steering system operates by drive-by -wire meaning there is no physical connection between the steering wheel and the wheels, but to me there was no perceptible difference in the feel, though I’d suggest turning off the active trace control option as you’ll find yourself fighting against the computer with your own readjustments.

The ride was otherwise stable, maybe not as solid as some European rivals, but still compliant and accommodating.

Being a sportier model fuel consumption was as expected at roughly 10.8L/100km.

Control from the cockpit is effortless with powered leather seats heated to three levels, a well positioned and easy to find ignition button, plus nicely laid out switchgear.

Pushing the front seats forward is a must of course to access the rear seats, but a one touch button which electrically slides the seat back and forth makes life easier.

Seating in the back is also surprisingly comfortable in the two bucket style seats with a cup holder in the middle (much like the Mustang) meaning more room than you’d normally, receive though the roofline is low so anyone over 5’10” would probably have some issues. Going further back and the boot is also limited, what being a coupé and all, the rear tapers off a and has a deep lip reducing the space though you can still fit a decent amount in it.

The highlight of the centre console are the two display screens

powered by Infiniti’s InTouch interface allow the user to operate the countless functions on the lower touchscreen, while viewing the sat nav and the upper screen.

The particular Q60 GT I was in came with a $3000 enhancement pack which included certain features found in the Q60 Sport Premium model like a 13 speaker Bose sound system, 360 degree camera, adaptive headlights and a sunroof.

While it goes come fitted with a forward collision avoidance system but it’s disappointing there aren’t any other driver assist systems installed unless you get into a high spec.

As a new parent I’m now getting used to swapping a car seat in and out of different models, but a small complaint in the Q60 is with the ISOFIX ports.

The protective cap is not flippable but is instead removable making it easy to misplace.

The Infiniti Q60 GT left a good impression on me considering its style, drive and inclusions and at $62,900 is good value for what is a luxurious alternate option for those interested in a sports coupé. 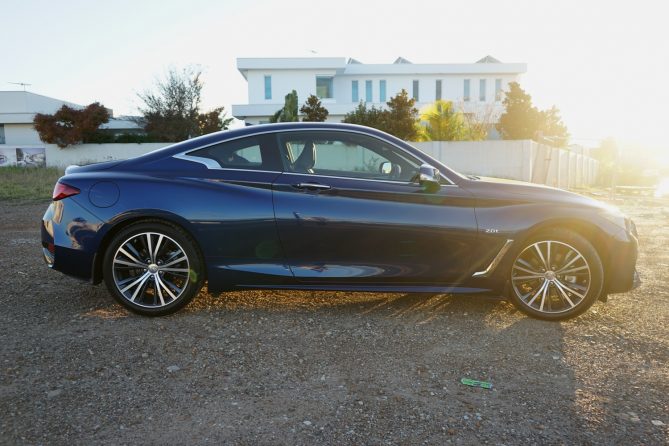 Thousands sliced off prices as Infiniti tries to stir local interest. Infiniti has moved to boost Australian sales by slicing thousands of dollars off the price tag of most of the models in their line-up. […]

2017 Infiniti QX30 GT road test and review… I’ve made no bones about what think about compact crossover SUVs and their place in the market. It beggars belief to me why they are a consideration amongst buyers […]

February 19, 2018
It’s the end of February and that means your car has suffered through another long and hot Aussie summer. Just think how many hours your car sat out in the baking sun over the past […]

August 20, 2016
Spring is just about here and that means its time to do some spring cleaning! Your car should be on the top of the list for a spruce-up in the lead-up to summer and don’t […]