At the top of the Ford Focus tree are a couple of sporty hatchbacks, the Focus ST and the even feistier Ford Focus RS which is in a class of its own.

I’m gonna hazard a guess that RS stands for ‘Really Speedy’. Okay, so it probably doesn’t but it wouldn’t be far off the mark.

With a 2.3L turbo petrol  engine pumping out a mind blowing 440Nm and 257kW there’s plenty of energy to burn  outdoing notable rivals like the VW Golf R (206kW/380Nm).

You know a car means business when it has strong hard plastic propping the seat bolsters and the Recaro sports bucket seats to ensure driver and passenger remain in place.

There are definitely no acceleration issues even in normal driving mode and in Sport mode it feels like strapping on a rocket pack with tonnes of power to push you into your seat while still being very quiet on the inside.

Beyond that are the selections of Race Track mode and the infamous Drift mode.

Selecting any of these will alter the suspension, steering, engine, stability control, and AWD in different combination levels.

Race Track turns off the traction control while in Drift the traction and input of torque to the rear wheels is controlled to facilitate sliding into corners, or drifting.

A simple search on YouTube will pull up any number of dumbos who have engaged this system on a public road only to crash their pride and joy sideways into a wall or embankment. 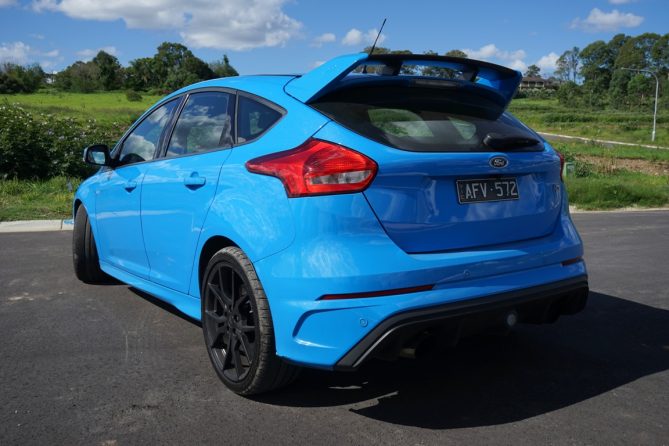 Unfortunately at Behind the Wheel we didn’t have the facility to test out these high performance capabilities which are, honestly, wasted on the regular commute on regular roads.

In the driving we did do, the Ford Focus RS is amazing around corners, really sticking them making occupants feel safe and secure.

Handling and steering was precise and effortless and gear shifts were short and well defined just the way you’d like it.

And it plays a nice exhaust note with plenty of grunt and crackle that matches what’s under the bonnet.

The payoff though, is obviously high fuel consumption of 12.2L/100km and that was in a week of regular urban driving.

Underfoot are Michelin Pilot Sport tyres with a profile of 35% on the 19” wheels meaning very hard suspension.

You really fell all the bumps with a lot of vibration and jerkiness and for this reason I wouldn’t recommend it as an everyday car.

Having said that the Focus RS was built for the drive and handling made from German workmanship and also has the look to match. The dashboard is much the same as the rest of the Focus range except for the pressure gauges on top of the dash and the current model still only possesses the SYNC 2 entertainment system though I prefer this four coloured quadrant interface.

Only thing that annoyed me was the auto start/stop systems, which I never like in a manual car.

The Ford Focus RS is one mean machine and one of the best sports models under $80k, though it’s homes is really on the track.

In the next review from the Focus range we come back down to earth with the Ford Focus Titanium.

New EcoSport SUV, Mondeo and Transit coming to help reverse Ford sales slide. It hasn’t been a great year for Ford locally, but some major announcements made today should help breathe some life into the […]