Checking out the base model of any car is always interesting because it gives a good starting point from which to jibber on about the whole model range.

I have only had a steer of the base Ford Escape Ambiente with manual transmission and front wheel drive along with the lower output 110kW 1.5-litre turbo petrol engine.

Guaranteed, it won’t be that popular because it’s a manual but add an auto transmission into the equation and no doubt you’ll find some interest.

That’s because it’s a decent sort of small SUV pitched at a relatively competitive $28,490. 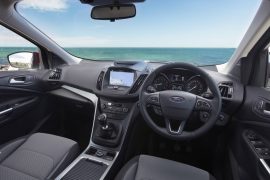 Escape was the replacement for Kuga back in Feb this year and with the name change came a complete rejig of specification, running gear and powertrain changes.

But Escape is strictly a five seater with a third row impossible to fit in the back.

That puts it at a disadvantage against some of the competition but really, truly, cramming seven seats into a car this size is somewhat optimistic or even perverse if you look at the room available.

So Ford could have got it right only having two rows with a decent load space down the back.

The Ambiente driven was powered by a 1.5 litre Ecoboost turbo petrol with 110kW/240Nm, not inspiring numbers but when translated to on road performance, the numbers are okay particularly when you see fuel consumption hovering around the 6.3L/100km mark.

It’s a direct injection engine for efficiency gains and is hooked up to the front wheels via a sweet shifting manual six speed box.

Ford promotes Escape as a ‘fun to drive’ vehicle and I would have to agree with that for general driving applications.

It steers well, has decent acceleration, that slick gear change, well sorted suspension and is generally good to drive.

But this and other models in the Escape range have minimal driver assist technology and it’s not even available as an option.

You need to shop further up the price scale to tap into this sort of technology.

The base model driven rolls on 17-inch steel wheels with plastic wheel covers which seems unusual these days but makes sense when you see how many alloys on other cars carry kerb rash. 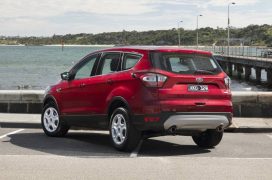 Ford equips it with an upgraded version of its Sync infotainment system that’s faster and better overall than what was previously available.

Despite tipping the scales at 1559kg, the base Escape feels pretty nimble all things considered.

They rate it at 1500kg for towing which could be feasible if you avoid hill starts.

One thing I really likes was the fuel requirement at E10 or you could put in 95 if you wanted to waste money. The cap-less fuel filler is also pretty cool.

On the other side of the coin, the space save spare is a bugger of a thing to have in an SUV.

It looks good in the metal too, certainly different from anything else in this style-cloned segment.

I wanted not to like the Ford Escape Ambient but it grew on me.

Auto would be better but not the dual clutch version.

2017 Ford Escape Trend road test and review… This is our first look at the Ford Escape since its reincarnation from the Ford Kuga. So what was it like? A little underwhelming I must say, […]