The new 7th generation BMW 5 Series is here and I was delighted to get along to the Australian launch of the model.

A vehicle that straight off the bat feels like it was the result of a large amount of planning and designing and I’m predicting that the new BMW will be a global sales star for the brand.

The technology is the big talking point, this car is seriously smart. Some of the tech wizardry that the new BMW 5 Series boasts includes:

Built in SIM card to help your car and your phone communicate – this helps you sync your calendar with your car and allows the vehicle to pre-plan your journey, including taking the traffic conditions into account.

A birds-eye view and 360 degree camera system that not only displays on the big 10.25″ display screen, but it’s also possible to see the images on your phone (via a free BMW app).

A speed sign recognition system that displays the local speed limit in the head-up display.

If you go over the speed limit the digital speedometer turns from white to red.

The 2017 BMW 5 Series also takes another step towards autonomous driving with a lane keep assist function that allows you to take your hands off the steering wheel – momentarily.

The new 5 Series also does away with the USB cord with wireless smartphone charging featuring as standard (though you need a special case for iPhones).

The optional, at no extra cost, Apple CarPlay is also wireless.

And a rear collision prevention system also features and this kicks in if the car sense you’re about to be hit from behind.

The system preps the car for impact by flashing the tail-lights, locking the doors and tightening the seat-belts etc.

Aside from the tech, BMW has also made the new BMW 5 Series up to 100kg lighter, this is through the addition of extra alloy in the chassis and aluminium body panels.

Boot space is also up 10 litres in the new model.

Overall dimensions are also up – the 2017 model growing in length by a hefty 28mm, it’s 8mm wider and the roof sits up 2mm higher than the old model.

Available initially in Australia across four sedan variants – details here, a hybrid version is coming soon too, the Touring (wagon) version will be along later in the year and we are looking at a 2018 arrival for the M5.

On the road the 7th generation BMW 5 Series is just about faultless.

The 2.0 litre diesel engine is surprisingly nimble and very quiet, albeit it isn’t as crisp as the 2.0 litre petrol.

I also got to sample the 540i, a model that features the straight-six BMW engine and while it is the most expensive version, it would be very hard to pass up.

Interestingly, BMW tell us they expect a lot of buyers to go for the six-cylinder diesel version, an offering I didn’t get to drive at the launch.

The handling is excellent, the ride is even better and the steering is right on target.

With all the tech built into the 5 Series it’s easy to get distracted from what is an enjoyable large sedan to pilot around. 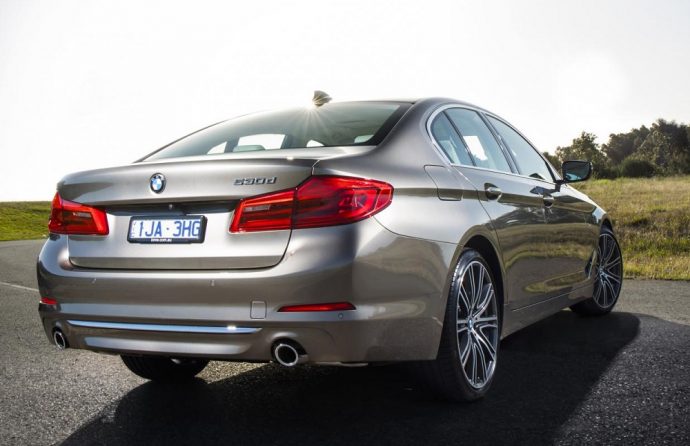 Other great things to report include the phenomenally quiet cabin – wind noise is almost completely non-existent.

The visibility from the driver’s seat is very good, despite quite chunky A pillars – BMW has rather cleverly shaped these into a wedge shape and that really helps visibility.

Headroom front and back is also excellent and the seats are terrific – a really nice blend of shape to hold you in and support.

The door pockets are a good size too and I love the really thick steering wheel.

And of course the BMW iDrive system, now in a new-generation form with widgets you can select/modify on the home screen, is always a winner.

Conversely, there were a couple of things about the new 5 Series though that didn’t quite impress me as much.

The big one was a lack of a seat-belt height adjustment on the B pillar.

This meant that I felt that the belt was a touching annoying on my shoulder in my preferred, slightly elevated, seating position.

I also felt like my right foot was just a bit cramped between the footwell wall and the brake pedal. I have size 12 feet and there seemed to be only a very limited amount of space for my right foot.

Same goes for my left foot, similar to what I found in the Audi A4, the BMW has a hefty transmission tunnel and this encroaches on the footwell and made me feel a bit like I was sitting slightly angled to the right – rather than straight ahead. 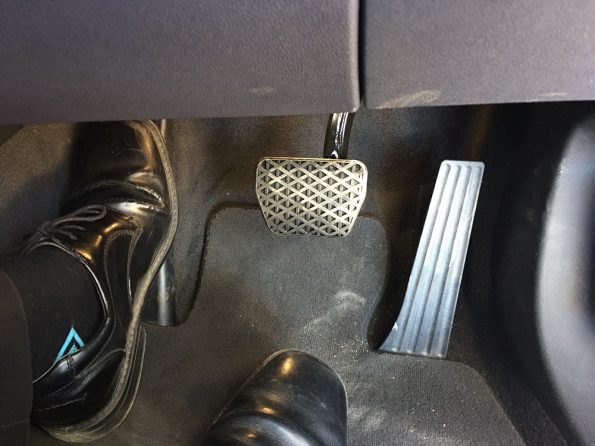 Other things that stood out to me include a rather tiny glove box, not quite as soft as I would like arm-rests, and some small buttons on the new climate control area on the dashboard.

Summing it up; the new BMW 5 Series is a beautiful car to drive and ride in and the engineers have done a terrific job with the feel of the car.

I thought it was extremely well-built, just about as smart as any car can be in 2017 and a good-looking new offering too.

There were some minor complaints, however, in the main, it looks like BMW has a new saloon that should have their rivals looking over their shoulders.

October arrival for 5 Series wagon The impressive new-generation BMW 5 Series will soon be available in Australia in wagon (or ‘Touring’) form. Confirmed today for an October arrival, BMW Australia tell us the new […]

BMW will be hoping the new addition to their SUV range, the BMW X2, will be just as successful as the X1 and X3 when it comes to market early in 2018. We published teaser […]

October 12, 2015
The Behind the Wheel Product of the Week is Altrex Rego Plate Locks. Every year in Australia tens of thousands of car license plates are stolen. In the overwhelming majority of cases thieves steal license […]