If you’ve ever dreamt of cruising down a boulevard in the back seat of a convertible with your hands in the air like a scene from a teen flick, then look no further than the 2016 MINI JCW Convertible.

With a turbo engine, neat features and a pop-down, soft-top roof, this MINI has trendy styling and zippy performance to really get the wind through your hair.

By no means practical, the MINI JCW Convertible is meant for fun and excitement.

I was not really a fan of MINIs based on my limited ride time in them due to the firmer suspension and low riding position, but my first test drive for Behind the Wheel was a minor revelation.

The ride quality was not as hard as I’d expected, and while you do feel lower to the ground this seems fitting  as reflected by the selection of the Sport mode stating “maximum go-kart feel” which isn’t far off the mark.

However, your buttocks will feel the firm suspension especially over speed humps. But the real thrill is in the JCW or John Cooper Works component of the car and its turbo engine.

Named after the creator of the MINI, sportier versions boast the JCW badge and for a, well, mini vehicle it has the heart of a lion.

The 2.0 litre turbocharged engine churns out 170kW of power and 320Nm of torque giving a punchy ride even in the normal drive mode.

With acceleration on-tap, direct steering and sharp handling you feel dynamic and in control of the vehicle at all times combined with that lower centre of gravity.

Parking too is a breeze due to the short wheelbase and so too is backing into a garage with a narrow body though the soft top creates a blind spot which is made up for by the reverse camera and sensors.

No gripes about the six-speed manual transmission with the BMW tune. Precise gates make gears shifts smooth for quick

This hard driving comes at a cost of 9.2L/100km which is quite a lot given the size of the MINI Convertible then again you can offset this with the auto start/stop or driving in Green mode. 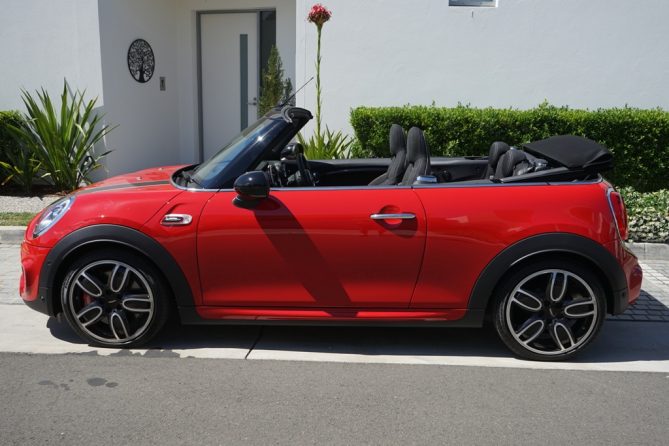 Priced from $54,900, the MINI JCW Convertible is definitely not to be trifled with and the vehicle I was given the keys to came with extra black stripes on the bonnet, Piano black interior, heated front seats ($490) and the $1500 driver control package (TPMS, collision warning, active braking, adaptive headlights) pushing the price up to $57,340.

But if you are prepared to part with that kind of coin, you’d want to enjoy yourself.

A single switch on the roof controls the opening of the roof (much like a sunroof), rolling down both windows and folding the roof in the back all in just over 10 seconds.

In the back there’s only enough space for two, with seating positions allocated in the scooped out bucket seats.

Even so, there is shortage of space with restricted shoulder room thanks to the roof housing and even less legroom which was a major problem for a slight guy like myself.

With the roof up passengers would feel enclosed and claustrophobic combined with the fact this model is a 3-door hatch.

There is allowance for a baby capsule with ISOfix anchors available but you’d struggle to fit it in there comfortably.

The MINI JCW Convertible is probably ideal as a two seater what with the 3-doors, limited rear space and very small boot. But that doesn’t mean you can’t carry stuff as the top of the boot can disengage allowing greater access and space together with the seats folded down. 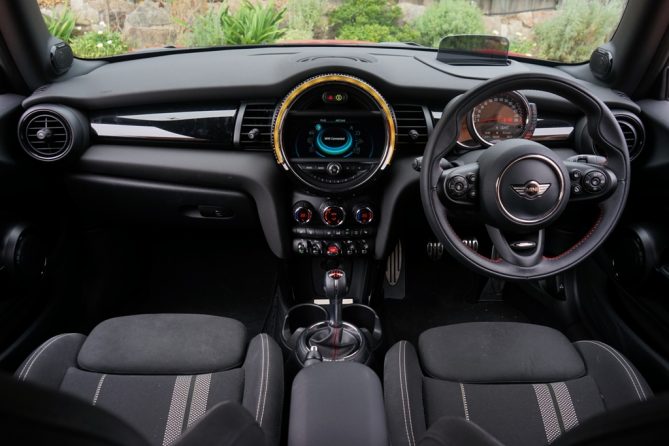 Aside from the capacity issue, the MINI has its own iconic funky style which would seem peculiar to some but trendy to others.

Everything in the car is circular; the large round centre display, round door handles, speakers, A/C controls, steering wheel centre, gauges, buttons, and even the drive mode selector at the base of the rounded gear knob.

Also unique are of course the aircraft style switches with conveniently placed red push button ignition in the centre dash, the projected MINI logo puddle lamp, and the cute warning sounds chirping in response to the parking sensors.

Impressive is the centre display with some of the best colour graphics I’ve seen on the market and easy to use menu complete with DAB+ and sat nav.

And coming out of the BMW shed, also has the joystick controls behind the gear knob like in the BMW M3 I recently drove. Although I did find it strange that the knob operated counter intuitively when scrolling.

The rest of the switchgear is quality, consisting of firm and defined (round) buttons but the highlight is the retractable driver’s HUD with projected speed and other info.

Overall, the 2016 MINI JCW Convertible was a surprise packet for me – sure it has some room issues but is ultimately built for fun and performance.

Safety: Not yet tested

2017 MINI Countryman road test and review… If you caught my recent review of the base-model MINI Countryman and first-drive review at the model’s Australian launch, you would see I’m a big fan. The MINI […]