Kia has simplified the Soul line-up with potential buyers only having to choose between an automatic or manual transmission. 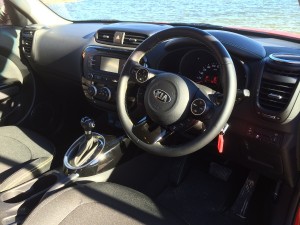 Previously available with an optional diesel engine, the 2014 variant is fitted only with a 2.0 litre petrol engine that produces 113kW and 191Nm.

I had a week checking out the automatic version of the Kia Soul and again come away feeling somewhat indifferent about this Kia offering.

The styling divides opinion, personally I don’t mind it, my biggest gripe is with the simple lack of grunt.

Weighing in at just over 1400kgs, the 2.0 litre engine just doesn’t have enough power or torque. Acceleration can only be described as dull and in a car that looks to have some life and personality it really lets it down.

During my time in the Soul I did a fair bit of running around in the city and a couple of long highway trips – across the week I averaged 7.8L/100kms, that’s less than the claimed combined rate of 8.4L/100kms and a very good result. 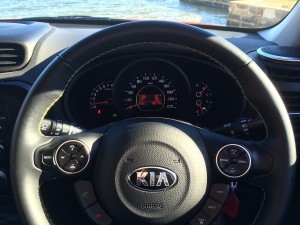 The transmission tries hard and generally does what it should; the steering comes with Flex-steer adjustment and is impressive.

The ride and handling are also better than passable.

Officially known as the Si grade, the Soul boasts a pretty handy list of standard features, including a reversing camera, an easy to program Bluetooth system with audio streaming, tilt and reach steering adjustment and rear park assist.

You also get two well-placed power outlets, auxiliary audio inputs and a USB port too.

Legroom front and back is more than reasonable, the square and boxy shape means the Soul offers quite good headroom, visibility from the driver’s seat is generally good with large wing mirrors a plus.

The seats are a bit firm and the bases, though well-sized, are a touch flat.

In saying that, the seats were comfortable enough, even after a good hour or so. 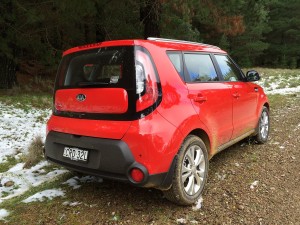 The gauges and driver info screen are simple and easy to read and the dashboard layout gets a pass mark (though I don’t really like the design of the dash-mounted speakers).

Boot space is pretty good and under the boot floor there are some handy storage spots.

The Kia Soul doesn’t yet have an ANCAP crash rating.

Summing it up: In itself the Soul is a generally pleasing and easy to live with car. The dull engine performance lets it down.

If you aren’t rusted onto the Soul’s styling, I would be saving the difference and jumping into a Kia Cerato, without hesitation!

2016 Kia Optima GT Turbo road test and review. The all-new Kia Optima is Kia’s contribution to the mid-size sedan segment, and it competes with the likes of the Toyota Camry and Aurion, Mazda6 and even […]

Kia Carnival, known in the USA as the Sedona, is the best-selling people mover in the country according to VFACTS, and Kia. It’s the sensible choice for those who fancy tea and Tim Tams at […]

The only area where we could deduct a point or two off the all-new Kia Rio was the models rather limited four-speed automatic transmission. Now, just two weeks after being launched in Australia (full details […]

August 18, 2015
The Behind the Wheel Product of the Week is the range of Father’s Day Car Care Kits from Altrex. It can be a difficult assignment getting dad a present he loves for Father’s Day. Avoid […]