I remember when the Kia Optima was first launched and my colleague Paul Maric got the first drive of the mid-size Kia sedan.

So impressed with the Optima, Paul summed it up by saying the Kia badges could be replaced with Lexus or premium German car brand badges and no one would question it.

History shows that the Optima went on to be judged our best car of 2011 and the model continues to find a healthy number of Australian owners.

Over the past four years Kia has also been busy upgrading and improving the Optima and it now boasts technology including satellite navigation and a reversing camera. Available in three specification levels – Si, SLi and the flagship Platinum, prices range between $30,990 and $40,490.

The first thing that strikes you about the Optima is the external styling. Different to anything that Kia has come up with before, the Platinum version of the sedan is boosted by LED driving lights and 18” alloys.

Under the bonnet all grades of the Optima feature the same 2.4 litre four cylinder petrol engine and transmission choice is limited to just a six-speed automatic transmission, the Platinum boasting paddle shifters.

On the road the big Kia rides remarkably well. Power is adequate without being exciting but the power is delivered smoothly through the transmission. I averaged a touch over 11.0L/100kms in a week of city driving (spot on the claimed urban rate); the official combined consumption is 7.9L/100kms. That’s good fuel economy, but not what you would call great. Aside from the roomy cabin the boot is huge. One downside though, headroom is a little less than what you might expect – a trade-off for the sweeping roofline.

As you might expect the Kia Optima has a full five-star ANCAP safety rating.

Summing it up: After another drive of the Optima and I’m even more convinced we got it right back in 2011. The Optima is a special car and one that I would be more than happy to recommend to anyone looking for a quality mid-sized sedan.

With a nicer feel than the Malibu and more personality than the Camry and a more generous five year warranty, I can’t give you any reason not to put down a deposit on a Kia Optima. 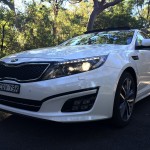 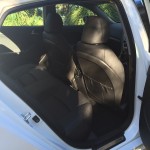 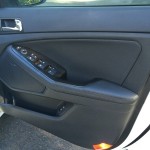 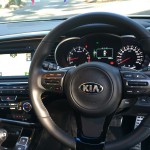