You wouldn’t find a bigger fan of the Chrysler 300 than me. From the ultra-impressive turbo-diesel V6 to the thirsty but wildly awesome 6.4 litre Hemi V8, the 300 is a well-priced and generously equipped large car offering. 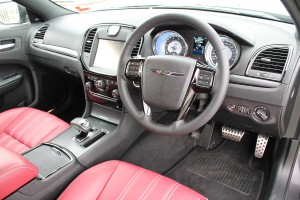 But there is another engine on offer – the Pentastar V6, which is the same engine you’ll find under the bonnet of a number of other Chrysler, Jeep and Dodge models, including the Wrangler.

With a 3.6 litre capacity and producing 210kW and 340Nm, the V6 does a more than reasonable job of moving the big Chrysler around.

Yes, if you compare it to the SRT8 and SRT8 Core versions of the 300 it is a little pedestrian, but for most applications the Pentastar motor more than does the job.

There is no shortage of ratios in the transmission either – the Chrysler 300 features an eight-speed auto!

Inside the cabin you quickly notice that the 300 now features the new short and stubby T-bar selector on the console, this replaces the more awkward ‘stepped’ selector that has featured in the Chrysler for years.

As you would expect from a large car sourced from North America the ride is very comfortable, 20” alloys and low profile tyres don’t really take away from the comfort.

Handling, for the size of the car, is pretty respectable and the brakes (with twin-spot calipers up front) are very good.

The cabin is quiet and nicely laid-out. Featuring Nappa leather seats, legroom front and back is good and while the roofline is quite low, visibility to the front and side is good and only passable to the rear.

Oh, and the most amazing Alpine sound system! 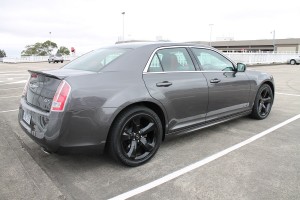 As yet the Chrysler 300 range doesn’t have an ANCAP safety rating.

Summing it up – The Chrysler 300 is one of my favourite cars. It’s big, comfortable, well-stacked and easy to live with.

The S version is a winner, though if push came to shove my choice would be the 300 with the turbo-diesel engine (not available in S configuration though).

Still, given the reasonable tag and all the standard features, you could certainly do worse than the 300 S.

Chrysler 300 SRT recalled over possibly dangerous electrical fault. A recall of current series Chrysler 300 SRT and SRT8 models has begun after an issue with the Daytime Running Lights was identified. Affecting 2015 and […]

Fans of the Chrysler 300 in Australia would be disappointed to hear reports that Fiat Chrysler is no longer building Chrysler and Dodge models in right-hand drive (RHD). That would mean the permanent end of […]

May 19, 2016
The must-have car feature on high-end models today is definitely puddle lights. But you don’t need to go out and spend a fortune to have this cool and handy feature, simply fit this week’s Car […]