What can I say about the Evo that hasn’t been said a thousand times before?

Here is a vehicle that’s about as close as you can get to a race track ready car, while still being reasonably adaptable to regular roads and normal traffic conditions.

The 2013 Mitsubishi Lancer Evolution is quite rightly considered a classic – even Subaru WRX fans would probably admit that! But in saying that I was just a little disappointed by, of all things, the Lancers performance.

The intercooled turbo 2.0L four-cylinder engine delivers 217kW and 366Nm; those figures to me suggest a great balance between acceleration and low-down grunt.

But around town, and below around 2750 rpm, the Evo feels of all things a bit sluggish.

Sure, bury your right foot and let the turbo get to work and it’s a different story, but often you just want that little bit more pep down low when negotiating around roundabouts etc. and I think some buyers would be disappointed by this hesitation.

Perhaps an extra gear would help in this regard?

In saying that the trade-off is extraordinary power and acceleration at speed, this is a car at home in a sweeping bend or banging up a mountain pass with the clock ticking and the turbo singing.

Fuel economy around town was reasonable at about 10.5L/100km; the official figure is a combined 10.1L/100km, so I actually did very well. Remember to factor in as well that the Evo only drinks 98 octane premium unleaded.

To match the grunt Mitsubishi has given the Evolution superb four spot brake calipers up front and two spot calipers on the rear; matched with larger discs the Evo has sensational stopping ability.

With all-wheel drive, rock-hard Bilstein sports suspension, super sharp steering and a wonderfully rigid feeling in the body of the Lancer, the Evolution delivers the whole package.

In fact the road holding ability of the Evo is almost unbelievable.

The sporty feel and nature continues across the body work with bonnet scoops, brake vents on the front guards, and of course that not so subtle rear spoiler.

Inside the cabin of the Mitsubishi Lancer Evolution you will find a mixture of sports car and low-spec Lancer.

The heated Recaro seats are geared towards the race track more than comfort, if you weigh more than about 80kgs be warned – you simply won’t fit!

Comfort is also let down by the steering adjustment being tilt only, the Recaro seats also offer no height adjustment – in other words think “one size fits all”.

Despite the bare bones feeling  in the cabin of the Evo there are a feature creature comforts including satellite navigation, power windows and mirrors, key-less ignition, cruise control and a reversing camera.

The Evolution also loses boot space due to the battery and windshield washer bottle being located behind the rear passenger seat.

On the safety front the Lancer Evolution boasts a 5-star ANCAP rating.

Summing it up, well the chances are if you’re reading this review then you are a Mitsubishi Lancer Evolution fan, you might even have one in your garage. I liked it to, but I might upset you just a little by saying that despite its many race tuned features and superb handling I think the near $66,000 price tag is about $20,000 too much.

We’re headed back in time this week Back to the 1970’s in fact as we shine a spotlight on an Aussie Icon – the Holden Sandman. Pete’s been hanging out with the guys from the […] 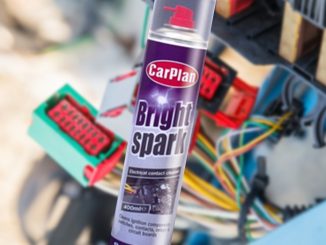 Whether you are just maintaining, repairing or completely overhauling your car, you need to have a can of Workshop Wonders Bright Spark Aerosol on hand. This brilliant product, our Product of the Week, is an […]